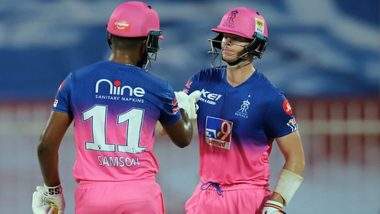 Riding on Sanju Samson, Jofra Archer and Rahul Tewatia’s staggering performances, Rajasthan Royals have Chennai Super Kings by 16 runs in their first match of Dream11 Indian Premier League (IPL 2020). Samson shone with the bat alongside skipper Steve Smith in the first innings as Rajasthan posted a mammoth total. Chasing 217 for victory, the Men in Yellow never looked in the hunt as their scoring rate was always on the lower side. Leg-spinner Tewatia rattled CSK’s middle order to push them further back in the contest. Faf du Plessis, however, tried to make a fightback with a half-century and skipper MS Dhoni also played some big hits in the end overs. However, their efforts went in vain as the three-time champions fell short of the target. RR vs CSK Highlights IPL 2020 Match 4.

Earlier in the match, MS Dhoni won the toss and asked Rajasthan to bat first. The decision looked good as Deepak Chahar dismissed Yashasvi Jaiswal in the third over. However, Samson, who came out to bat at number three, joined forces with skipper Steve Smith and the duo unleashed mayhem against the likes of Ravindra Jadeja and Lungi Ngidi. To make things worse for the MS Dhoni-led time, Jofra Archer smashed Lungi Ngidi for four sixes in the last over. As a result, RR posted 216/7 while batting first which eventually proved to be enough. Meanwhile, let’s look at some stat highlights of the game. Sachin Tendulkar’s ‘Desert Storm’ Reference and other Top Reactions After RR Beat CSK in IPL 2020 Match 5 in Sharjah.

# Sanju Samson’s 19-ball fifty was the second-fastest half-century by a RR batsman in IPL and six fastest overall.

# Samson's half-century is also the fastest fifty against Chennai Super Kings in IPL.

# Lungi Ngidi got smashed for 30 runs in the last over. This was the joint-most expensive 20th over in IPL history.

# 17 sixes were smashed by Rajasthan Royals batsman in this match, joint-most for any team against CSK in IPL history.

# In total, 33 sixes were recorded in this match, joint-highest in an IPL game.

# David Miller got dismissed for a diamond duck (getting out without facing a delivery) on his debut match for Rajasthan Royals.

With this victory, the Men in Pink have opened their account in the team standings and will like to carry their winning momentum further in the tournament. They will next meet KL Rahul’s Kings XI Punjab at the Sharjah Cricket Stadium. On the other hand, CSK must aim to rectify their mistakes to make a comeback against Delhi Capitals on September 25 at the Dubai International Cricket Stadium.

(The above story first appeared on LatestLY on Sep 23, 2020 12:38 AM IST. For more news and updates on politics, world, sports, entertainment and lifestyle, log on to our website latestly.com).