Rahul Tewatia was the pick among the bowlers for Rajasthan with the spinner returning with 3/37 which included the crucial wickets of Shane Watson and Sam Curran. Jofra Archer was the most economical bowler for Punjab giving away only 26 runs in his four over-spell and also picking the important wicket of Faf du Plessis. 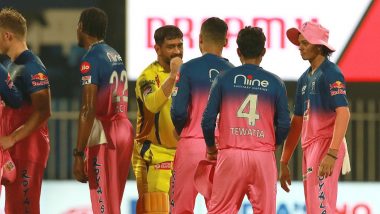 Rajasthan Royals beat Chennai Super Kings by 16 runs to get off to a winning start in Indian Premier League 13. Rajasthan, helped by some powerful blows from Sanju Samson and Jofra Archer and a magnificent fifty from Steve Smith, posted 216 runs on board before restricting CSK to 200/6 and clinch victory by 16 runs. Chennai Super Kings, who beat Mumbai Indians in their opening match, failed to chase down the score despite having wickets in hand. Many, including Sachin Tendulkar and Suresh Raina, took to twitter to react the match with many also having their say on MS Dhoni’s decision to come lower down the batting order. RR vs CSK Highlights IPL 2020 Match 4: Rajasthan Royals Beat Chennai Super Kings by 16 Runs.

Rahul Tewatia was the pick among the bowlers for Rajasthan with the spinner returning with 3/37 which included the crucial wickets of Shane Watson and Sam Curran. Jofra Archer was the most economical bowler for Punjab giving away only 26 runs in his four over-spell and also picking the important wicket of Faf du Plessis. MS Dhoni Fans React in Disappointment After Captain Cool Comes to Bat Lower Down the Order During RR vs CSK IPL 2020 Match.

The South African kept CSK in the chase with 72 from 37 deliveries but it wasn’t enough. Du Plessis’ innings comprised of seven maximums and one boundary. Shane Watson was the next best scorer for CSK with 33 runs from 21 deliveries while MS Dhoni smashed three sixes in the final over to remain not-out on 29 from 17 deliveries. Did Sakshi Rawat Slam On-Field Umpire After MS Dhoni’s Altercation With Chettithody Shamshuddin During RR vs CSK, IPL 2020?

Never ground your bat on a surface that isn’t hard. Batsmen need to remember that there is a desert underneath! 😋 #CSKvsRR

Just a RR fan who can't believe his team won against CSK.#CSKvRR pic.twitter.com/0log4PY2dh

MS Dhoni Kept it Too Late?

Dhoni smashed 3 sixes back to back

CSK fans reaction knowing that Dhoni has spoiled the game but managed to hit 3 sixes and ended with 175 + strike rate. pic.twitter.com/12dXRNAc7A

Even if CSK did not win the match I don't care ,Dhoni's 3 consecutive sixes made my day. pic.twitter.com/SmhCREFEJj

Asked to bat first, Rajasthan Royals lost debutant Yashasvi Jaiswal early to Deepak Chahar but Sanju Samson and Steve Smith ensured there were no more hiccups. The pair shared 123-run partnership in just 9.2 overs to give the Royals a perfect start. Samson was the more devastating of the two as the 25-year-old smashed nine massive sixes and tore the CSK spin attack with a 19-ball half-century. He was eventually dismissed by Lungi Ngidi after a knock of 74 runs 32 deliveries.

Smith kept on going after Samson’s dismissal and helped Rajasthan reach 180+ with a fine half-century. Smith was dismissed for 69 runs from 47 deliveries with four maximums and as many fours. Archer then came to life in the final over of the Royals’ innings and smashed Ngidi for four consecutive sixes to take Royals past the 200-run mark. Archer was helped by a couple of no-balls from the South African speedster with Archer ending on 27 runs from just 8 deliveries and helping Royals set a massive total on the scoreboard.

(The above story first appeared on LatestLY on Sep 23, 2020 12:31 AM IST. For more news and updates on politics, world, sports, entertainment and lifestyle, log on to our website latestly.com).