Sachin Tendulkar Hits the Gym After Unlock 3.0, Posts a Video on Social Media 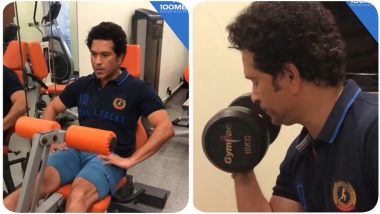 Sachin Tendulkar might have retired from international cricket in 2013 but his commitment to fitness still remains. The Master Blaster hit the gym and was seen flexing his muscles as he worked on his legs and also lifted a few weights. In the video, he was further seen performing a single-legged deadlift with kettlebells. The Master Blaster posted the video of the same on social media.  So from today onwards, Maharashtra has opened up gyms as a part of unlock 3.0. No sooner the gyms were opened by the government, Sachin Tendulkar hit the gym and even posted a video on social media. Sachin Tendulkar Posts Old Pictures With His Sister Savita on Raksha Bandhan, Says ‘Bond of Love Stronger That Ever Despite Temporary Distance’.

In the video which was not longer than 30 seconds, he was seen lifting 10kg dumble and was seen working on his upper body as well. Along with the video, the song 'Unstoppable' played in the background. The video would surely be a motivation not only to the fitness enthusiasts but also the ones who were planning to sweat it out in the gym after unlock 3.0. You can check out the video below:

Owing to the COVID-19 scenario, the gyms had been shut for about four months now. However, the government on Wednesday issued Unlock 3 guidelines, allowing gymnasiums and yoga institutes to function from August 5. They also revoked night curfew even as all other activities banned earlier continue to remain prohibited.

(The above story first appeared on LatestLY on Aug 05, 2020 11:19 AM IST. For more news and updates on politics, world, sports, entertainment and lifestyle, log on to our website latestly.com).