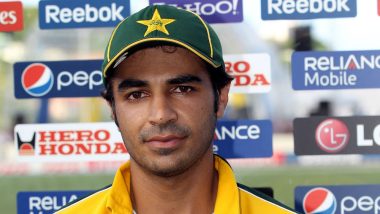 Salman Butt is one of the greatest batsman produced by Pakistan. However, it was the spot-fixing scandal that put the halt to his stunning career. The former Pakistani batsman was accused of spot-fixing during the tour of England way back in 2010 and thus was given a five-year ban along with Mohammad Amir and former medium-pacer Mohammad Asif. Now the former Pakistani cricketer has come forward and has lashed out at the Pakistani Cricket Board and has said that it lacks integrity. Pakistan Super League 2019: Salman Butt Replaces Injured Muhammad Hafeez for Lahore Qalandars.

He also slammed the ones who have been asking the PCB to issue a life ban on the tainted players. According to him only the PCB and ICC have the rights to speak over this. "Integrity is not something which should be talked about in Pakistan cricket,” he said. Butt also mentioned that he known players who have made it to the squads only because of their connections and many others have been a chance for a comeback without any meaningful performance. For Butt, this is no less than corruption.

He further mentioned that once the punishment implies that once you have served the time, the cricketer should be treated like any other player. ‘Where does their integrity go when they are in the mix and working with those people? Or when they endorse players because of their connections", asked the former Pakistani captain. After finishing his ban, he made a comeback in the PSL and has been doing well in the domestic circuit as well but is yet to make a comeback into the squad.

(The above story first appeared on LatestLY on Apr 11, 2020 09:03 AM IST. For more news and updates on politics, world, sports, entertainment and lifestyle, log on to our website latestly.com).