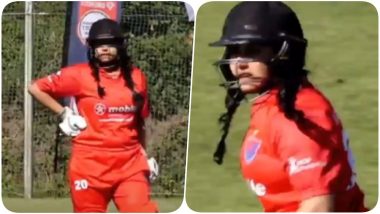 Sharanya Sadarangani is on cloud nine as she has become the first woman cricketer to feature in the ECS T10 League 2020 in U-19 cricket team. Back in 2012, Sharanya played with Veda Krishnamurthy. The wicket-keeper represented KSV Cricket Club in the match against PSV Hann Munden. However, things didn’t go as she would have wanted to as the team went on to lose the match by five wickets. The KSV Cricket Club got off to a terrible start as the team lost nine wickets for 51 runs. Sharaanya came to bat for the side at number 11 after Masoud Dostkhe was sent packing into the pavilion. Dream11 ECS T10 League Stockholm 2020 Schedule: Get Free Live Cricket Streaming Online Details, Full Fixtures, Teams, Squads and Time Table in IST.

However, after a facing a couple of balls, she got run out and the team got bundled out on the score of 53 runs in just eight overs. The wicket-keeper had an okayish day behind the stumps. She grabbed a stunning catch of Adeel Ahmad, who was adjudged as not out. But a couple of deliveries later the batsman made way to the pavilion. Speaking about her experience playing in the Dream11 European Cricket Series Kummerfeld the wicket-keeper said that it is a fantastic tournament and she does not have any experience in the T10 format of the game. "It’s a fantastic competition to be involved in. Having not experienced any T10 cricket before, it’s great to get the opportunity to play in this format of the game,” she said.

Despite losing the game,  ECS Founder Daniel Weston was quite impressed with the way she kept wickets. Weston was in awe with her first caught behind off the bowling of former Afghanistan international Izatullah Dawlatzai.

(The above story first appeared on LatestLY on Jul 01, 2020 11:17 AM IST. For more news and updates on politics, world, sports, entertainment and lifestyle, log on to our website latestly.com).