After Broad removed Kohli and Rahane, Indian broadcaster of the series Sony Pictures Networks (SPN) goofed up with the bowler's name. 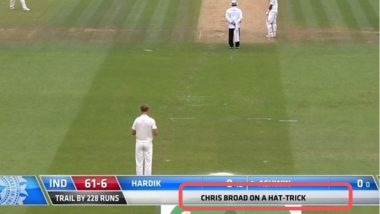 Stuart Broad removed Virat Kohli and Dinesh Karthik on consecutive deliveries and had a chance to claim a hat-trick. (Photo: Twitter)

After the lunch break on day four of Lord’s Test between India and England, Stuart Broad picked four wickets put the visitors in all sorts of trouble. Broad accounted for Ajinkya Rahane, Cheteshwar Pujara, Virat Kohli and Dinesh Karthik’s wickets in quick succession as team India was left tottering at 61 for six. Broad removed Kohli and Karthik on consecutive deliveries and had a chance to claim a hat-trick, which he later missed.

After Broad removed Kohli and Rahane, Indian broadcaster of the series Sony Pictures Networks (SPN) goofed up with the bowler's name. Ahead of the hat-trick ball, instead of Stuart Broad, the broadcaster flashed "Chris Broad on a hat-trick” on the score ticker. Chris, the former England cricketer, is the father of Stuart. Ind vs Eng 2nd Test Video Highlights: Watch India’s Fall of Wickets in Second Innings of Lord’s Test.

After noticing the mistake, social media users showed no mercy while trolling the broadcaster. However, one of the users wrote: “technically broadcaster isn't wrong as his full name is Stuart Christopher John Broad being Chris Broads son.”

Here are some of the reactions:

Welcome back Chris Broad to international cricket. And here is your hattrick ball @bhogleharsha @sanjaymanjrekar pic.twitter.com/0VGkfuesY2

Broad was instrumental in helping England win the second Test. The pacer along with James Anderson shared eight wickets in India’s second innings. Courtesy quality bowling, India were handed an innings defeat after being bundled out for 130. IND vs ENG 3rd Test 2018: Rishabh Pant to Make Test Debut at Trent Bridge?

With this win, England now have 2-0 lead in their kitty in the five-match series. The third Test begins on August 18 at Trent Bridge. India will be hoping to bounce back and stay alive in the series.

(The above story first appeared on LatestLY on Aug 13, 2018 03:27 PM IST. For more news and updates on politics, world, sports, entertainment and lifestyle, log on to our website latestly.com).