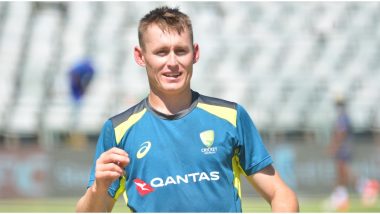 A lot has come to the forefront about Australian cricket and the nature of its players ever since the infamous ball-tampering scandal in Cape Town, 2018. From their grim nature to their win at all costs philosophy, every attribute of the Australian cricket and its cricket team have come under scrutiny. ‘The Test’, a sports documentary on the Australian cricket team, however, has provided great insights into the team showing that like all mortals, Australian cricketers, who have dominated world cricket for most periods in its history, is emotionally fragile and vulnerable in tensed situations. One among the many insights in the documentary is the prank on Marnus Labuschagne by Australia Test captain Tim Paine and head coach Justin Langer. Jimmy Neesham Trolls ICC for Asking Fans to Find Virat Kohli in ‘Sea’ of KL Rahul, Says ‘You Guys Really Have Lost the Plot’.

A video clip shared by The Test as well as cricket.com.au shows the young batsman hilariously pranked by the combination of Paine and Langer. The video starts with Labuschagne and Paine sitting on a couch during a Q&A session. Both the players have to guess the correct answer for every question, write it down on a paper and then show it to the audience. The pair are then asked: “who is the idol of Marnus Labuschagne?” They both guess the correct answer – Jacques Kallis. This Day, That Year: When Sam Curran’s Hat-Trick Propelled Kings XI Punjab to Victory Against Delhi Capitals in IPL 2019.

But Paine then decides to have little fun at the expense of young Labuschagne and teams up with head coach Langer for the prank. In the video, Paine can be heard saying in the background “Yeah we will get JL to do it. Yeah, just say, ‘mate you cannot keep going back to your South African heritage. You play Test cricket for Australia. Talking about Jacques Kallis as your mentor and what you did growing up...’.”

When Marnus Labuschagne Got Pranked on April Fools Day

Both Langer and Paine then enter the dressing room where Marnus is shown to be watching some sort of videos sitting on a couch along with Steve Smith and Pat Cummins. With a plan in place, Langer then approaches Labuschagne and takes him away for a serious talk. He tells the 25-year-old "You have to be very careful. When you have got your Australian stuff on and you talk about Jacques Kallis and AB de Villiers and all that stuff... you have got to be careful. Otherwise, boys aren’t going to be looked pumped about it.”

Labuschagne is shocked by Langer’s reaction and tries to justify his answer to the coach. “All right, that wasn’t my intention,” says the youngster visibly shocked by the reaction to his answer about his cricket idol. He then goes on to ask Langer “So, what should I do the next time I am asked such questions” to which the former Australia batsman replies “Just tell them Steve Smith was your idol growing up. Because it (his answer) is going global so you got to be careful."

Both Langer and Labuschagne then return to the fold and as soon as Paine sees Labuscahgne he taunts him by saying “You keep talking about ‘I am South African’, but no one cares mate.” But fails to control his laughter. Langer also then breaks into a laugh and tells the youngster "Hey Marn, happy April Fool’s day son,” with the 25-year-old breathing a sigh of relief.

(The above story first appeared on LatestLY on Apr 01, 2020 08:42 PM IST. For more news and updates on politics, world, sports, entertainment and lifestyle, log on to our website latestly.com).