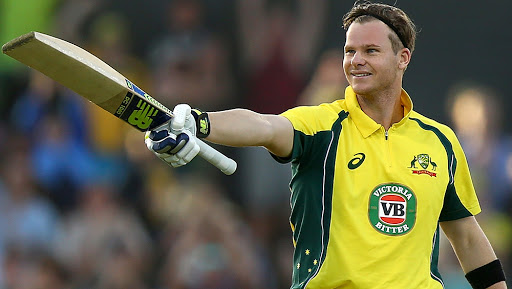 London, June 17: India skipper Virat Kohli had stopped Indian fans from booing former Australia skipper Steve Smith during their World Cup encounter in London on June 9. Pointing towards the fans, Kohli had asked them to show respect to Smith and the Australian has said that it was a lovely gesture from the Indian captain. Virat Kohli Gestures the Crowd to Stop ‘Cheater Cheater’ Chants Directed at Steve Smith During IND vs AUS, CWC 2019.

"It was a lovely gesture by Virat. It doesn't really bother me what the crowds do to be perfectly honest. I am just blocking it all out but it was a lovely gesture from him" Smith told reporters after Australia's victory against Sri Lanka. Speaking about it in the post-match press conference, Kohli apologised to Smith on behalf of the Indian crowd.

Virat Kohli’s Gesture to Crowd Booing Steve Smith Gets a Thumbs Up From Fans:

"Just because there are so many Indian fans here, I just didn't want them to set a bad example, to be honest, because he didn't do anything to be booed in my opinion," the 30-year-old said.

"He's just playing cricket. He was just standing there, and I felt bad because if I was in a position where something had happened with me and I had apologised, I accepted it and I came back and still I would get booed, I wouldn't like it, either.

"So I just felt for him, and I told him, I'm sorry on behalf of the crowd because I've seen that happen in a few earlier games, as well, and in my opinion that's not acceptable," he added.

[#SpiritOfCricket] @imVkohli turned to the stand where Steve Smith was fielding in the deep & gestured the fans to cheer for him when he saw them booing Steve in a hideous manner. (Credits: @SamLandsberger) @BCCI @ICC @cricketworldcup #ViratKohli #TeamIndia #CWC19 #VGVK18FC pic.twitter.com/8Mjad9W4Ys

Smith and David Warner have been repeatedly heckled on the field since their return to the Australian team following their one-year bans over the Newlands ball-tampering incident. However, Kohli said he felt for Smith in his current circumstance.

"Look, I think what's happened has happened like long back, the guy is back, he's trying to play well for his side. Even in the IPL I saw him, it's not good to see someone down like that, to be honest. We've had issues in the past. We've had a few arguments on the field. But you don't want to see a guy feeling that heat every time he goes out to play.

"What's happened has happened. Everyone has known that. He's come back. He's worked hard. He's playing well for his side now," he added.