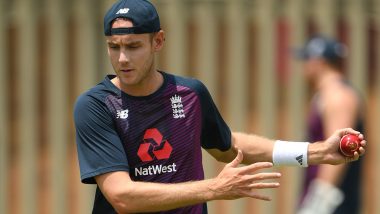 England pacer Stuart Broad has been fined 15 per cent of his match fees by father and match referee Chris Broad for breaching Level 1 of ICC code of conduct during the 1st Test between England and Pakistan in Manchester. The 34-year-old speedster played a crucial role in the encounter by picking up six wickets as the hosts overturned 107-run deficit from the first innings to win by three wickets. Stuart Broad’s First Instagram Post After Taking 500 Test Wickets is Special! England Pacer Says 'I Love Cricket'.

Stuart Broad was found guilty of violating Article 2.5 of the ICC Code of Conduct for Players and Player Support Personnel, which relates to ‘using language, actions or gestures which could provoke an aggressive reaction from a batter upon his/her dismissal during an international match. Most Wickets in ICC World Test Championship 2019–21: Stuart Broad Leads the Bowler’s List.

The event indecent in the 46th over of Pakistan’s second innings when the English pacer dismissed Yasir Shah. After getting the spinner’s wicket, Broad was deemed guilty of using inappropriate/offensive language towards the 34-year-old and was punished by match referee and dad Chris Broad. The 34-year-old has been fined around £2,000 for the episode.

Following the news, Stuart Broad joked on Twitter by saying that his father Chris was ‘off the Christmas card & present list’

Along with the fine, one demerit point was added to the pacer’s disciplinary record, taking his total demerits points to three. This was Broad’s third offence in 24 months with the previous two being recorded on 27 January this year during the fourth Test against South Africa at the Wanderers and on 19 August 2018 in the third Test against India at Trent Bridge.

Demerit points stay on a player’s record for 24 months, meaning the sanction against India expires next week. However, further such offence under the ICC code of conduct during the second Test against Pakistan will trigger a one-match ban.

(The above story first appeared on LatestLY on Aug 11, 2020 11:50 PM IST. For more news and updates on politics, world, sports, entertainment and lifestyle, log on to our website latestly.com).