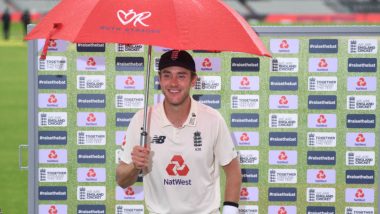 Stuart Broad became the second England bowler and seventh overall to pick 500 test wickets. The pacer achieved the feat while playing against West Indies in the third and final Test at the Old Trafford Cricket Ground in Manchester. Broad scraped ten wickets in the match as England defeated West Indies by 269 runs to win the series. The pacer trapped Kraigg Brathwaite in front of the wickets as his 500th Test victim. Broad, who made his Test debut in 2007 against Sri Lanka, is only the fourth fast bowler in the world to pick 500 Test wickets. Stuart Broad Becomes Seventh Bowler to Take 500 Wickets in Test Cricket.

The 34-year-old pace took 140 Test matches to complete 500 wickets. Meanwhile, following England’s win, Broad took to Instagram and in his first social media post after the historic 500th Test wicket milestone thanked fans. “Blown away by the kind support. Thank you so much. To take # 500 in a Test match win leading to a series win feels very special. I love cricket,” the English cricketer wrote in the caption of his Instagram post. Twitterati Hail Stuart Broad and Chris Woakes As England Beat West Indies by 269 Runs in Third Test to Win Series 2–1.

Blown away by the kind support. Thank you so much. To take # 500 in a Test match win leading to a series win feels very special. I love cricket 🏏 😁

Broad was dropped from the first Test which England lost. He was then included in the playing XI for the second Test and picked six wickets. Interestingly, Broad emerged as the highest wicket-taker in the series as he scalped 16 wickets in two matches.

(The above story first appeared on LatestLY on Jul 28, 2020 11:15 PM IST. For more news and updates on politics, world, sports, entertainment and lifestyle, log on to our website latestly.com).