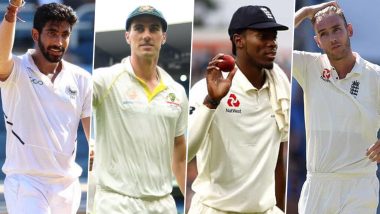 Stuart Broad leads the individual list for most wickets taken by a bowler in ICC World Test Championship 2019-2021. Broad, who became only the seventh bowler to take 500 Test wickets, has taken 24 wickets in his last three Test matches, which includes a 10-wicket haul against the West Indies. The 34-year-old has 59 wickets from 12 Test matches in WTC. Pat Cummins, who has played two fewer Tests, is 10 wickets behind at the second place. England have three bowlers in the top 10 while Mohammad Shami and Ishant Sharma are the two Indian bowlers in the chart. Take a look at the top 10 wicket-takers in the 2019-21 World Test Championship so far. Most Runs Scored in ICC World Test Championship 2019–21: Take a Look at the Top-10 Run Getters in WTC.

The 2019-21 ICC World Test Championship started with the 2019 Ashes last August and will be played until June 2021. The final of the World Test championship will be held from June 10 to 14 next year at the Lord’s Cricket Ground. A total of 72 matches will be played in the WTC with each team playing six Test series each. The top two ranked sides at the end of the WTC will play in the final.

(The above story first appeared on LatestLY on Aug 11, 2020 06:13 PM IST. For more news and updates on politics, world, sports, entertainment and lifestyle, log on to our website latestly.com).