Sunil Gavaskar Birthday Special: 220 vs West Indies and Other Spectacular Performances by The Legendary Indian Opener 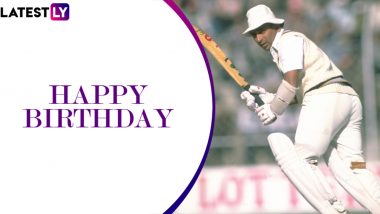 Arguably the greatest opening batsman to have stepped onto the cricket field, Sunil Gavaskar celebrates his 71st birthday on Friday (July 10, 2020). Born in 1949, the right-handed batsman was the mainstay of Indian batting line-up during his playing days and his record speaks volumes of his prowess. Hailed as the ‘Little Master,’ Gavaskar was blessed with an impeccable technique and his unswerving concentration made him a headache for the bowlers. However, it was his fearless approach which made him stand apart from others. He tackled the likes of Joel Garner, Malcolm Marshall and Dennis Lillie without helmets and the 5 ft 5 in batsman never looked on the backfoot. Below, we’ll revisit some of his best performances. This Day That Year: Sunil Gavaskar Stars as India Registered Their First ODI Victory.

Gavaskar made his Test debut back in 1971 against the mighty West Indies team and that too at their own den. However, the opener announced his arrival with a jaw-dropping performance against the intimidating Caribbean bowling line-up. He scored 774 runs in five Test matches and guided his side to historic 1-0 triumph. He didn’t look back after that as he played one brilliant knock after another and guided India to several wins. In fact, he is the first batsman to reach 10,000 Test runs. As the legendary cricketer turns a year older, let’s revisit some of his best performances. Sunil Gavaskar Lashes Out at Wisden for Excluding Rohit Sharma From Its List of Top Five Cricketers of 2019.

Gavaskar made a sensational start to his Test career as he made a mockery of the Caribbean bowling line-up during India's 1971-72 tour. However, his best performance came in the fifth and the final match of the series. Batting first, the opener brilliantly tackled the pacers and made a blistering century. He bettered his score even further in the third innings as the right-handed batsman brought up his maiden double-hundred in Test matches. Riding on his efforts, the visitors were able to draw the encounter.

96 Vs Pakistan in Bengaluru

Chasing 221 in the fifth Test of Pakistan’s 1987 Tour of India, Gavaskar didn’t put a foot wrong and played a match-defining knock. Wickets were falling in regular intervals at the other end as the likes of Wasim Akram and Iqbal Qasim were breathing fire with the ball. Gavaskar’s resilience eventually got ended at the score of 96. The rest of the Indian batsmen couldn’t do much as the visitors won the game by 16 runs.

India’s loss was on the cards as they were asked to chase 438 runs in the 4th Test of India’s 1979 Tour of England. However, Gavaskar played a jaw-dropping knock and almost guided his side to a historic win. Facing the likes of Bob Wills and Ian Botham, the opener scored runs all over the park and didn’t any chances to England bowlers. He went on to score a brilliant double ton as India were on the verge of chasing the total. However, he got out on 221 as the visitors could only score 429/8 and the match ended in a draw.

172 Vs Australia in Sydney

Another Sunil Gavaskar special came during the 3rd Test of India’s 1986 Tour of Australia. Batting first at Sydney, the veteran batsman looked at his prime as he toiled the Aussie bowlers. He gave full respect to the vulnerable deliveries along with sending the bad ones to the boundaries. The opener went on to score a brilliant 172 and the visitors piled up 600/4 while batting first. India were approaching a memorable win. However, the homes team made a comeback with the bat and the match was drawn.

103 Vs New Zealand in Nagpur

Gavaskar’s only ODI century came during India vs New Zealand clash in 1987 World Cup. Chasing 222 for victory, the talismanic opener went after the bowlers from the first ball and made his intent very clear. The Kiwi bowlers were taken to cleaners as India were well placed on the driver’s seat. Gavaskar eventually scored 103 off 88 balls as India won the game by nine wickets.

The legendary batsman eventually bided adieu to the game in 1987 but not before scoring 10122 and 3092 runs from 125 Test matches and 108 ODIs. Post-retirement, Gavaskar donned the commentator’s hat and gave his voice in many matches.

(The above story first appeared on LatestLY on Jul 10, 2020 09:00 AM IST. For more news and updates on politics, world, sports, entertainment and lifestyle, log on to our website latestly.com).