Shastri's comments to the Indian team about wearing '36 like a badge' after the side collapsed for just 36 runs in the first Test against Australia last year was an iconic moment in his tenure as India head coach. He said, "When something like that happens, the team tends to lose belief in itself, there is a sense of disappointment and of giving up. And that is where Shastri played a huge role." 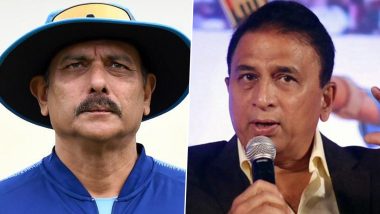 Ravi Shastri's tenure as India head coach may have ended without an ICC title but it was surely full of memories, impressive wins and about making a statement in overseas conditions. And according to the legendary Sunil Gavaskar, one of the most iconic moments and the biggest highlight of Shastri's time as India head coach was definitely the Tests in Australia where India went from being 36 all out to eventually winning the series. India had been dismissed for a paltry 36 in the first Test, which happened to be a pink-ball one and following that, captain Virat Kohli had left the side due to the birth of his daughter. India, without some key players and under the leadership of Ajinkya Rahane, ended up winning the series earlier this year. KL Rahul Becomes Second Indian Opener to Score a Test Century in South Africa, Joins Wasim Jaffer; Former Cricketer Reacts With a Meme

While speaking to Star Sports, Gavaskar recalled Shastri's famous 'wear 36 all out like a badge' comment to the Indian team and threw light on his role in the famous comeback in Australia.

“It obviously has got to be the way India bounced back earlier this year after being dismissed for 36 (in Adelaide Pink Ball Test). Because when something like that happens, the team tends to lose belief in itself, there is a sense of disappointment and there is a sense of giving up. And that is where Shastri played a huge role because from what I've read, is that he said that 'you wear this 36 like a badge'. And then Ajinkya Rahane, the way he led the side in the three Tests, and of course everyone stepped up."

"We played almost like an A team, not even the regular team. But every player who played in that, every replaced player came in and did well. And that again tells you the kind of influence and input that Ravi Shastri had on the younger players and the fringe players who are waiting for their opportunities," he added.

This Test series win in Australia coupled with a one, two years ago has to be one of the most memorable moments of Shastri's tenure as India head coach, ever since he joined the Men in Blue in 2017. Under his tutelage, India made it to the semifinal of the 2019 World Cup and the final of the inaugural World Test Championship. However, one of the lowest points have to be the T20 World Cup 2021 group stage exit. India currently lead the five-match Test series in England 2-1 with the postponed final Test to be played in 2022.

(The above story first appeared on LatestLY on Dec 27, 2021 04:07 PM IST. For more news and updates on politics, world, sports, entertainment and lifestyle, log on to our website latestly.com).