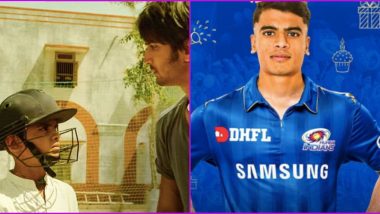 The late Bollywood actor Sushant Singh Rajput had some connection with cricket. In his debut movie Kai Po Che!, Sushant played the role of a cricket coach. And then years later he aced the role of MS Dhoni in the former Indian captain’s biopic ‘MS Dhoni: The Untold Story’. In Kai Po Che!, Sushant’s character Ishan trains Digvijay Deshmukh’s character Ali, a young cricketer. Interestingly, last year at the Indian Premier League (IPL) 2020 auctions, Deshmukh was picked by Mumbai Indians for the upcoming season. The young cricketer, following Sushant’s death, recalls a promise he made to the late actor and how he regrets it now. Sushant Singh Rajput’s Old Video on MS Dhoni’s Cricket Trivia is Going Viral.

“He was passionate about cricket. On the last day of the shoot, I had promised him I’d not meet him till I became a decent level cricketer. This year, when I got selected to play for Mumbai Indians, I decided to meet him but then the lockdown happened and now he is no more. I wish the lockdown wouldn’t have been there, at least then I would have been able to fulfil the promise I made to him. I failed to do so,” Deshmukh was quoted as saying by Hindustan Times

During the shooting of ‘MS Dhoni: The Untold Story’ Sushant had visited Pune and even that time Deshmukh didn’t meet the late actor. “Even then I did not meet him because I wanted to keep the promise. I regret it,” the Mumbai Indians cricketer added.

Mumbai Indians in a tribute to late actor posted about the promise on social media and wrote, “Whenever Kai Po Che’s ‘Ali’ takes field next, his master ‘Ishaan’ will smile from the heavens.” When Sushant Singh Rajput Impressed Sachin Tendulkar With His Batting Skills While Preparing for MS Dhoni Biopic.

Whenever Kai Po Che’s ‘Ali’ takes field next, his master ‘Ishaan’ will smile from the heavens 🤗

Deshmukh, who was picked by Mumbai Indians for his base price of INR 20 lakhs, made his debut in Ranji Trophy last year and T20 debut in the Syed Mushtaq Ali Trophy. As of now, IPL 2020 has been suspended indefinitely due to the coronavirus crisis.

(The above story first appeared on LatestLY on Jun 19, 2020 09:24 AM IST. For more news and updates on politics, world, sports, entertainment and lifestyle, log on to our website latestly.com).