This Day That Year: Muttiah Muralitharan Made His ODI Debut for Sri Lanka 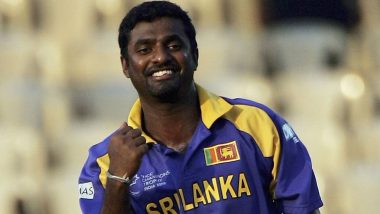 Sri Lanka’s legendary off-spinner Muttiah Muralitharan is undoubtedly one of the best bowlers to have ever stepped onto the cricket field and his record is nothing but staggering. However, it was this day (August 12) only when the talismanic bowler made his maiden appearance in international cricket. Muralitharan made his ODI debut against India at the R.Premadasa Stadium in Colombo. The off-spinner didn’t take long in proving his mettle as he delivered a stellar spell against the might Indian batting line-up and played a vital role in Sri Lanka’s eight-run triumph. Muttiah Muralitharan Becomes First Bowler to Take 800 Test Wickets.

Defending a peculiar total of 204 runs, the debutant bowled an economical spell by giving just 38 runs in 10 overs. He also picked a crucial wicket of Pravin Amre. Owing to his brilliant performance in limited-overs cricket, Muralitharan got his maiden Test cap just two weeks after his ODI debut. The off-spinner bowled several impressive spells early on his career. However, he took a few years to become an absolute nemesis for the opposition teams. Muttiah Muralitharan Special: 9/65 Against England and Other Top Bowling Performances by Legendary Sri Lankan Off-Spinner.

It was the year 1998 where Muralitharan unleashed his prowess by bowling one sensational spell after another. Be it any format, any venue, the off-spinner had the ability of tormenting batsmen in every condition. Years passed by and Muralitharan kept adding feathers to his hat. Along with being a great cricketer, Murali was also a great ambassador of the gentleman’s game as he never got involved in an on-field spat during his 18-year long career.

The talismanic bowler finally bid adieu to the game after the ICC Cricket World Cup 2011 but not before scaling 534 ODI wickets and 800 Test wickets. His tally of 1347 international wickets is still the highest for any player and no one looks going closer to his record any time soon.

(The above story first appeared on LatestLY on Aug 12, 2020 08:59 PM IST. For more news and updates on politics, world, sports, entertainment and lifestyle, log on to our website latestly.com).