Umran Malik Deserves To Be in the Indian Squad for the T20 World Cup, Says Dilip Vengsarkar

Despite the presence of specialist bowlers like Bhuvnehwar Kumar, Avesh Khan, Harshal Patel along with Jasprit Bumrah, former India captain Dilip Vengsarkar feels that pace sensation Umran Malik deserves to be in the Indian squad for the T20 World Cup. 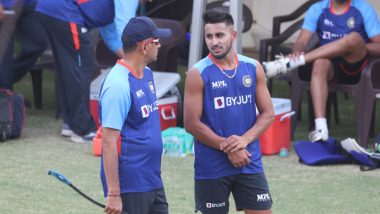 Mumbai, June 26 : Despite the presence of specialist bowlers like Bhuvnehwar Kumar, Avesh Khan, Harshal Patel along with Jasprit Bumrah, former India captain Dilip Vengsarkar feels that pace sensation Umran Malik deserves to be in the Indian squad for the T20 World Cup. He added that it's important to give an opportunity to Malik who has already proved himself with his impeccable pace bowling during the IPL and now team management should give him a chance to play at the international tournaments. Malik was handed a maiden call-up for the five-match T20I series against South Africa at home, but the pacer did not get a chance. India vs Ireland 1st T20I 2022 Live Streaming Online: Get Free Live Telecast of IND vs IRE Cricket Match on TV With Time in IST.

However, Malik is also part of the Hardik Pandya-led Indian team which is set to play two T20Is in Ireland. When asked Malik's inclusion in the playing squad against Ireland, Vengsarkar who was present during a panel discussion with members of the 1983 World Cup-winning team on the occasion of the 39th anniversary of their triumph at Lord's, said, "I hope so because he (Umran) is a very exciting talent. He did well in the IPL and he deserves a chance as he looked the best bowler in the format. I hope he is on the plane and I am sure he will do well if given an opportunity." Rohit Sharma, India Captain, Tests Positive for COVID-19 Ahead of Rescheduled Fifth Test Against England.

"He (Umran) is young and raring to go. You must give an opportunity to someone who is in form. He is young, keen to play and hungry for success," he added. Legendary Roger Binny also backed Umran Malik to play for India sooner than later. "There is definitely going to be a bigger bunch of fast bowlers coming through now. And he (Umran) should be given a chance straight away because he has proved that he is quick and if you saw him bowl some of the yorkers in the IPL that was brute force. So you cannot keep a youngster out for that long," Binny said.

(The above story first appeared on LatestLY on Jun 26, 2022 03:25 PM IST. For more news and updates on politics, world, sports, entertainment and lifestyle, log on to our website latestly.com).