Virat Kohli Hugs Rohit Sharma After his Heroics in Super Over During IND vs NZ 3rd T20I 2020, Squashes the Rumours of Rift Between the Two! (Watch Video) 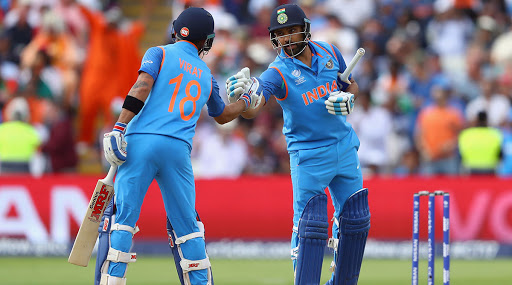 Since a very long time, there have been rumours between Virat Kohli and Rohit Sharma. There have been many reports of which said that all is not well between the captain and the vice-captain. But here’s one more instance which has another story to say. After Rohit Sharma’s last six during the Super Over, India went on to the clinch the five-match T20I series by 3-0. Needless to say that the Men in Blue were elated with the narrow win. Virat who was in the dub out came run down the ground and hugged Sharma. New Zealand Vs India, Cricket Score 3rd T20I Match.

The gesture by the India captain was shared by the fans who then shared it further on social media. Almost the entire squad went onto wish Sharma and KL Rahul. Sharma scored two back to back sixes when India needed 10 runs off a couple of balls and pulled off a stunner. This was the first time that India won the T20I series in New Zealand. Check out the video of the incident below:

Talking about Sharma, he was in a bad form in the first two matches and got out earlier. However, the Indian opener fond form in the third game as he slammed 65 runs from 40 balls. The Hitman laced his innings with six fours and three maximums and thus completed 10,000 international runs. Kane Williamson was the only man from the Kiwis side to have fought hard to chase a total of 179.