Cristiano Ronaldo became the highest goal-scorer of non-penalty goals in the history of the Champions League. Ronaldo scored a goal last night at the 81st minute of the match to rescue Manchester United in the game against Atalanta in UCL 2021-22. 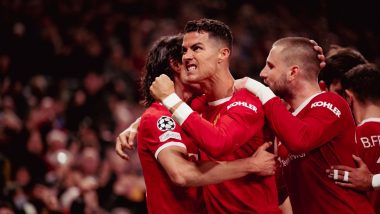 Marcus Rashford scored a goal at the 53rd  minute of the match and then Harry Maguire netted an equaliser at the 75th minute. Ronaldo then chipped with a super good header and the entire stadium erupted with a thunderous cheer for the Portugal star. The netizens and fans also could not stop cheering for the five-time Ballon d'Or winner and Ronaldo also trended on social media. Now, check Ronaldo's post-match reaction below.

Look at Cristiano Ronaldo's reaction after full time. This is what it means. 😍pic.twitter.com/FWfOQCj88f

After the match, Ole Gunnar Solkskjaer was all praises for the former Juventus star. "I was really, really pleased with how he led the line. As a centre forward we asked him to run the channels, drop in, press more because we're at home, of course. We want to get the crowd behind us. He did everything a centre forward should be doing," he said. Do let us know your view on the game in the Comments section below.

(The above story first appeared on LatestLY on Oct 21, 2021 04:54 PM IST. For more news and updates on politics, world, sports, entertainment and lifestyle, log on to our website latestly.com).