India hockey has achieved yet another milestone and this time by not scoring goals but by winning the FIH’s hockey awards. India’s athletes and coaches dominated the FIH Hockey Stars Awards 2020-21. 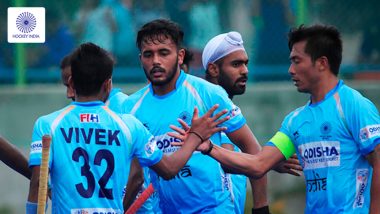 India hockey has achieved yet another milestone and this time by not scoring goals but by winning the FIH’s hockey awards. India’s athletes and coaches dominated the FIH Hockey Stars Awards 2020-21. And it is for the first time that a country has won in all categories that they have been nominated. India was nominated in eight different categories, winning all eight awards.

India’s drag-flick sensation Harmanpreet Singh clinched the ‘FIH Player of the Year’ award in the men’s category. He was the top scorer in India’s Bronze medal-winning performance at the Tokyo Olympic Games. Belgium’s Arthur Van Doren and Alexander Hendrickx and Australia’s Jake Whetton, Tim Brand, and Aran Zalewski were the other athletes in the hunt for the Award. But it was Haramanpreet with 52.11 points who was on top.

Indian Women’s Hockey team drag-flicker Gurjit Kaur was awarded the ‘FIH Player of The Year’ in the women’s category with 46.63 points. Three Netherland players and two Argentinian players were in the hunt for the award along with Kaur. The 26-year-old was sensational in the Indian Historic Olympic semi-final run.

Often known as the wall of Indian hockey, PR Sreejesh won the award for the best Goalkeeper in the Men’s Category. Sreejesh gave his career-best performance at the Tokyo Olympics and was the main pillar of the Indian defence. He scored 58.34 points for the Awards. Belgium’s Vincent Vanasch and Australia’s Andrew Charter were the other nominees for the award.

Indian Women team custodian Savita won the ‘Goalkeeper of the Year’ Award in the women’s category. Her role was instrumental in India's success at the Tokyo Olympics. Savita scored 58.75 points to clinch the awards. The other nominees were Great Britain’s Maddie Hinch and Argentina’s Belen.

Vivek Sagar Prasad won the award for the Best Rising Star award in the Men’s category by scoring 66.78 points. It is his second consecutive award. South Africa’s Mustaphaa Cassiem and Australia’s Sean Findlay were nominated alongside Prasad for the award.

In the women’s category, Sharmila Devi won the FIH Rising Star of the year. Devi won the award with 55.51 points ahead of Great Britain’s Fiona Crackles and Argentina’s Valentina Raposo.

A team is nothing without a coach. The guide, the mentor, and the building block of a team is the Coach. Graham Reid, Indian Men’s Hockey Chief Coach was awarded the FIH Coach of the Year award. He was nominated along with Australia’s Colin Batch and Belgium’s Shane with a score of 50.93, Graham was the winner.

Former Indian Women’s Hockey Chief Coach Sjoerd Marijne too was awarded the ‘FIH Coach of the Year’ for the women’s team category. He was nominated along with Great Britain’s Mark Hager and Netherlands’ Alyson Annan.

How are the awards decided?

The FIH awards are decided by combining vote percentages from three different areas. As per FIH, the votes from the national associations, who are represented by their captains and coaches, counts for 50 percent of the overall result. The media decide on 25 percent of vote share which includes Eminent sports journalists. The remaining 25 percent of votes are decided by the fans and players. In the 2021 edition, a record 300’000 fans casted their votes to decide the winners.

(The above story first appeared on LatestLY on Oct 07, 2021 08:56 PM IST. For more news and updates on politics, world, sports, entertainment and lifestyle, log on to our website latestly.com).