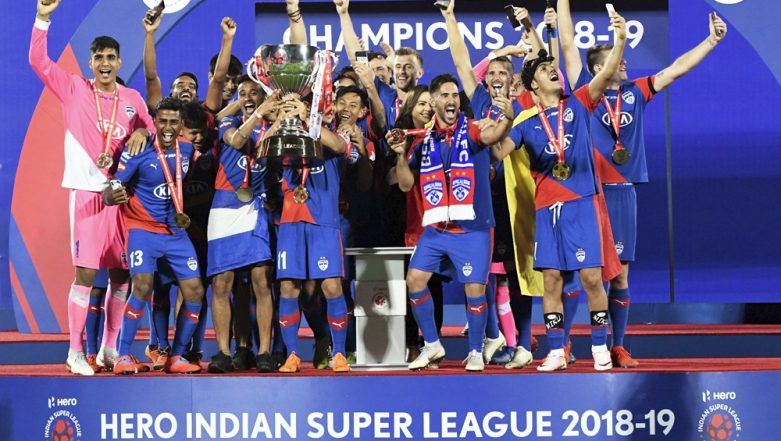 New Delhi, July 3: The All India Football Federation (AIFF) will request Asian Football Confederation (AFC) to allow the I-League and Indian Super League (ISL) to continue running simultaneously for the next three years, its President Praful Patel said here. Patel met the representatives of I-League clubs to talk about the roadmap of Indian football after reports of AIFF's move to hand ISL the top tier status in Indian football surfaced. I-League Clubs to Meet AIFF President to Oppose Plans to Make ISL as Top League.

"Tomorrow (in the future), we don't want to pack up the I-League. It should continue. But ultimately there should be a roadmap of Indian football. Two leagues cannot go on permanently. The AFC will also not allow it forever. It is just a solution for the time being," Patel said after the meeting at a plush hotel here, looking to buy more time and come to a amicable solution.

"I feel a reasonable two to three years window should be given for I-League also to be continuing. I cannot give you any assurance yet because I have to talk to the AFC," Patel said. "AFC also have to agree to what I am saying. Our commercial partners have to be consulted. At the end of the day, there are costs involved," he added.

As per a statement which was released by the unified I-League clubs, the AIFF is likely to make the ISL the top football league, superseding the I-League, from the 2019-20 season, and the clubs are already toying with the idea of taking legal steps. The clubs had met last week and announced that they would approach the "appropriate courts" when such a decision is announced. The joint statement on these lines carried the signatures of representatives from East Bengal, Mohun Bagan, Gokulam Kerala, Minerva Punjab and Churchill Brothers.

Talking about the Masters Rights Agreement (MRA) signed originally between AIFF and IMG-Reliance and now between AIFF and Football Sports Development Limited (FSDL), a subsidiary of IMG-Reliance where Star is also a partner, Patel said: "There are also rights which they got through the Master agreement which we had signed many years ago. Within that framework which is three years, I feel that the I-League also must co-exist with the fullest recognition of the AFC so that it is an AFC product.

"It should not be something which is not recognised by the AFC. So the clubs in I-League must also not get lost in the upward movement. These are just suggestions which we will try to talk to all the stakeholders."As per the MRA contract, there is a clause to make ISL the "most senior and prestigious football league in India".The meeting was also attended by AIFF general secretary Kushal Das and I-League CEO Kushal Das.

"Indian Football's backbone has been the developmental and promotional activities, including the youth programmes conducted by the Hero I-League clubs. With the advent of the Hero Indian Super League, which is also a league recognised by the Asian Football Confederation, it is imperative to find a viable, and sustainable mechanism to mitigate the concerns about the future of the Hero I-League, and its clubs.

"AIFF and the Hero I-League Clubs have agreed and will work together to find a solution to all issues including the calendar, scheduling, broadcasting, and the continuation of the Hero I-League for a defined period, till the roadmap is ascertained in a time-bound manner in consultation with FSDL, and the AFC.

"A lot of other meaningful issues were also simultaneously discussed, and it is hoped that all issues regarding the future of the Hero I-League vis-à-vis the Hero Indian Super League will be resolved shortly."The Hero I-League clubs were happy to have engaged in the discussions which will pave the way for a resolution of the pending issues, and thanked the AIFF President for his understanding, and patient hearing," the statement further read.