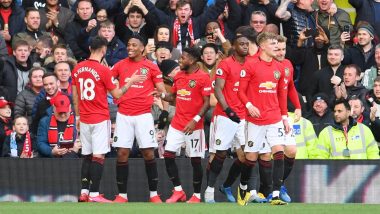 Aston Villa is all set to take on Manchester United at the Villa Park tonight.  The Red Devils are currently placed on number five of the EPL 2019-20 season whereas, Aston Villa are on number 18 winning seven games out of 33. In this article, we bring to you the probable line-up of both sides. But before that, let’s have a look at the preview and the team news of the match. Talking about the hosts, the team is set to miss the services of Matt Targett and Bjorn Engels. John McGinn could have regained fitness and could make a comeback into the squad. AVL vs MUN Dream11 Prediction in Premier League 2019–20: Tips to Pick Best Team for Aston Villa vs Manchester United Football Match.

Talking about the Red Devils, Victor Lindelof had picked up an injury during their game against Bournemouth. Eric Bailly is all set to be featured in the line-ups.  Paul Pogba and Bruno Fernandes are likely to remain in the fixture as they have done immensely well in their last outings. There could be some changes in the attacking position. Mason Greenwood, Marcus Rashford and Anthony Martial have been extremely good with the job for the United. David de Gea who has been in spotlight for sloppy goal-keeping is likely to feature in the playing XI as he has been touted to be in a dangerous form owing to his form.

Now let's have a look at the probable line-ups of the squad.

Manchester United will be looking forward to extending their winning streak. Aston Villa is all set to go by 4-3-3 line-up whereas the RedDevils are expected to put up a combination of 4-2-3-1.  The match will begin at 12.45 am IST.

(The above story first appeared on LatestLY on Jul 09, 2020 04:59 PM IST. For more news and updates on politics, world, sports, entertainment and lifestyle, log on to our website latestly.com).