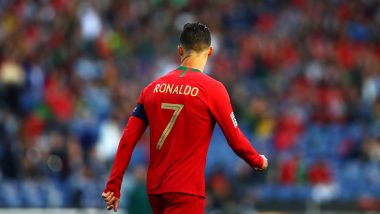 Cristiano Ronaldo and agent Jorge Mendes have donated 1 million euros to help fund three intensive care units (ICU) in hospitals in Portugal. The Portuguese pair’s donations will help in purchasing equipment to set up ICUs at the Santa Maria Hospital in Lisbon and the Santo Antonio Hospital in Porto, said reports. Ronaldo and Mendes were also reported to have agreed to give “two intensive care units” with a “capacity of 10 beds each” to the University Hospital centre of Northern Lisbon (CHULAN), a chain of hospitals in the national capital. Earlier, Lionel Messi and Manchester City coach Pep Guardiola had also made similar donations to public hospitals in Barcelona. Messi and Guardiola were said to have made donations to help buy equipment for healthcare in Spain. Cristiano Ronaldo to Extend Financial Support to a Hospital in Portugal Amid Coronavirus Lockdown.

"This is a very important investment that includes more than a dozen respirators and other necessary equipment," Eurico Castro Alves, director of the hospital's surgery department, was quoted as saying by news agency AFP. The units will reportedly bear the names of their donators. "If necessary, Cristiano Ronaldo would like to do the same in Madeira," he added. The hospital in Lisbon reportedly has a capacity of 77 beds.

According to a report from Goal.com, the hospital was contacted by agent Mendes who volunteered in funding two intensive care units for COVID-19 patients. "There are fans, monitors, infusion pumps, beds, all the equipment that makes up an intensive care unit equipped to provide assistance to a patient infected with Covid-19."  Mendes had already donated 1000 masks and 200,000 protective gowns to the Sao Joao hospitals in Porto last week while also eight ventilators to be distributed across hospitals in Portugal.

Meanwhile, Ronaldo has been in quarantine ever since Juventus teammate Daniel Rugani tested positive for COVID-19. The Portuguese superstar had initially returned to Portugal to visit and take care of his mother who was admitted in a hospital in Madeira after suffering a mild stroke and has remained there since then.

(The above story first appeared on LatestLY on Mar 25, 2020 10:21 AM IST. For more news and updates on politics, world, sports, entertainment and lifestyle, log on to our website latestly.com).