Cristiano Ronaldo Birthday Special: What Is Ronaldo’s Net Worth? Is Ronaldo Married? And Some Other FAQs About the Juventus Striker 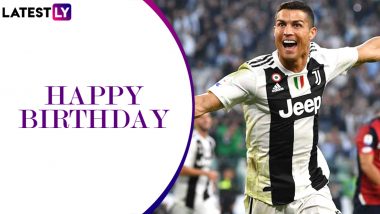 Arguably one of the best players of his generation, Cristiano Ronaldo turns 35 on February 5, 2020 (Wednesday). Born in Madeira, Ronaldo is the fourth-youngest child of Maria Dolores Aveiro and Jose Dinis Aveiro, a part-time kit man. The Juventus striker is a well-known personality to everyone who follows football as well as to the ones who don’t. He has won five Ballon d’Or and four golden shoes, both of which are a record for a European player. In this article, we take a look at some of the Frequently Asked Questions (FAQs) about the current Portugal national team captain. Cristiano Ronaldo Penalty Double Against Fiorentina Sends Juventus Six-Points Clear on Serie A Points Table.

Cristiano Ronaldo started his career at Sporting CP and was promoted to the first team at the age of 16. In the 2003-04 season during a friendly game against Manchester United, Ronaldo impressed Sir Alex Ferguson and Scottish manager signed him for the Red Devils at a transfer fee of 12.24 million pounds, making him United’s first Portuguese player. After spending five years in England, Ronaldo moved to Spain as Real Madrid broke the bank to sign him for a record fee at that time of 80 million pounds. Following Raul’s departure in 2010, he was handed the number ‘7’ jersey the one which he wore at Manchester United. On July 2018, Ronaldo left Real Madrid and signed for Juventus for a club-record fee of 100 million euros. This transfer was the highest for a player over 30 years of age. Cristiano Ronaldo Named the MVP Player of the Month in Serie A 2019-20, Juventus Relives CR7’s Goals in Jan 2020 (Watch Video).

What is Cristiano Ronaldo’s Full Name?

What is Cristiano Ronaldo’s Net Worth?

Celebrity Net Worth estimates the Juventus striker’s worth at around $450 million. Majority of this comes from him playing football for nearly two decades and his different endorsement deals.

What Does CR7 Means?

Cristiano is very commonly known as CR7. This nickname is derived by the initials of his name ‘Cristiano Ronaldo’ and his famous jersey number 7.

Cristiano Ronaldo is not married till date but has been with his current girlfriend Georgina Rodriguez since 2017.

How Many Kids Does Cristiano Ronaldo Have?

How Many Goals Has Cristiano Ronaldo Scored?

Cristiano Ronaldo has scored 623 goals at club level and is Portugal national team’s record scorer with 99 goals so far. He is the highest goal-scorer at the international stage among the current active players.

Cristiano Ronaldo is currently playing for Italian side Juventus FC and recently became the fastest player to reach 50 goals for the club. He has already won the league title in his first season in Italy and now his eyes will be set on the European Glory with the record Italian champions.

(The above story first appeared on LatestLY on Feb 05, 2020 08:30 AM IST. For more news and updates on politics, world, sports, entertainment and lifestyle, log on to our website latestly.com).