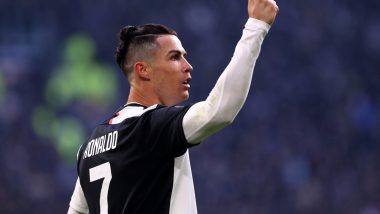 Cristiano Ronaldo was on fire last night as he broke a 60-year-old record with a stunning free-kick against Torino at the Allianz Stadium. The Old Lady kept up their winning streak and with this, the team upsurge their chances to win the Serie A 2019-20 title. Talking about the match, before the interval Paulo Dybala and Juan Cuadrado had already put Bianconeri on the lead of 2-0. Then at the 55th minute of the match, the five-time Ballon d'Or winner sprang into action with a stunning free-kick and thus giving Juventus a 3-0 lead. Cristiano Ronaldo Catches Up on the Race for Golden Boot 2019-20, Lionel Messi Not in Top Five.

With this, Cristiano Ronaldo becomes the first player to have scored 25 goals in one season for Juventus. Omar Sivori was the man who scored 25 goals in one season for Juventus way back in the season of 1960-61. Sivori scored exactly 25 to help Juve win the Scudetto that season Former Juventus stalwarts like Alessandro Del Piero, Roberto Baggio and Michel Platini could not get close to this record.

With this Ronaldo has now scored 25 goals in 24 appearances. An own goal from Koffi Djidji put the team four up. Andrea Belotti from the Torino did chip in with a goal at the 45th minute of the match, but Juventus was truly on fire and thus they won the game 4-1. The team continues to stand on number one with 75 points in their kitty. They will next play against AC Milan on July 8, 2020, at the Allianz Stadium.

(The above story first appeared on LatestLY on Jul 05, 2020 08:49 AM IST. For more news and updates on politics, world, sports, entertainment and lifestyle, log on to our website latestly.com).