Juventus faced a heartbreaking exit from the Champions League 2019-20 after they lost to the French side Lyon. Cristiano Ronaldo's brace could not help the side as Lyon went on to win the match on away goals. Like his fans, even the five-time Ballon d'Or winner was heartbroken and ended up with his eyes welled up. Now after his exit from the Champions League, the Portugal star took to social media and posted a picture of himself kissing the ball. 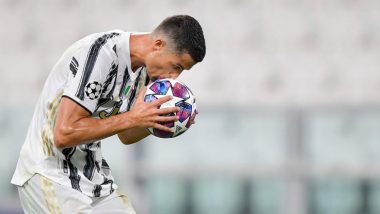 The Portugal star posted a long note and said that the season got over much earlier than expected for the Serie A side. He also said that a club like Juventus should always consider themselves to be the best in the world. While promising to come back stronger, CR7 spoke about his personal records of 37 goals this season and said that this has filled him with the desire to get better with each passing day. Now let's have a look at the note posted by CR7 below:

The 2019/20 season is over for us, much later than usual but yet sooner than we expected. Now it’s time for reflection, time to analyse the ups and downs because critical thinking is the only way to improve. A huge club such as Juventus must always think like the best in the world, work like the best in the world, so that we can call ourselves one of the best and biggest clubs in the world. Winning the Serie A once again in such a difficult year is something that we are very proud of. Personally, scoring 37 goals for Juventus and 11 for the Portuguese National Team is something that makes me face the future with renewed ambition and desire to keep doing better and better each year. But the fans demand more from us. They expect more from us. And we have to deliver, we must live up to the highest expectations. May this short vacation break allow us all to make the best decisions for the future and come back stronger and more committed than ever. . See you soon! 💪🏼👊🏼

With a couple of goals, he broke a plethora of records as he became the first players in 8- years to score 37 goals for Juventus. With 67 goals in his kitty, Ronaldo also has the most number of goals in the knock out tournament.

(The above story first appeared on LatestLY on Aug 09, 2020 11:10 AM IST. For more news and updates on politics, world, sports, entertainment and lifestyle, log on to our website latestly.com).