Cristiano Ronaldo is having a ball of a time at Serie A for Juventus as the striker has netted nine goals in 15 appearances. 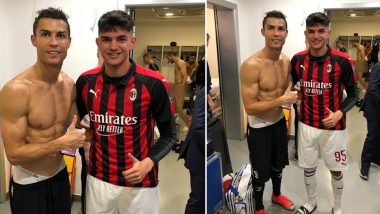 Cristiano Ronaldo is having a great time at Serie A and has been scoring for Juventus in almost every game. Needless to say that former Real Madrid player is more than happy at his recently shifted club. His performance has definitely helped the team maintain the numero uno spot at the Serie A points table. The team in the last match yesterday defeated AC Milan by 2-0 and he even Ronaldo contributed to the game by scoring a goal. After the match, he even met AC Milan's more youngest  Raoul Bellanova and graciously posed for a picture with him. But, somehow the snap grabbed headlines for the wrong reasons. The happy picture of CR7 and Bellanova was photobombed by Teammate Giorgio Chiellini, who was seen walking across the locker room naked.

Yes! You read it right. The snap has been doing round on social media and has kept the netizens entertained. We, however, do not know about the authenticity of the photo. Check out the image below. Cristiano Ronaldo Defends Gonzalo Higuain After Being Pushed by AC Milan Footballer During the Match Against Juventus (Watch Video).

When you see it pic.twitter.com/K3KyhlJz09

Ronaldo was in the news for defending AC Milan’s Gonzalo Higuain after latter was shown a red card. Ronaldo said that Higuain’s reaction was quite understandable as the team was on the losing side. He also hoped that the AC Milan player was not offered a stringent punishment for the act. “I told him to calm down, as he risked an even worse ban. He didn't do much, he was annoyed at losing the game. That's understandable. I hope he is not punished too severely,” said Ronaldo while speaking to a channel. Higuain however, went on to apologise to the fans of the club and said that the foul was totally uncalled for. Juventus is currently on 34 points and leads the Serie A table.

(The above story first appeared on LatestLY on Nov 14, 2018 01:41 PM IST. For more news and updates on politics, world, sports, entertainment and lifestyle, log on to our website latestly.com).