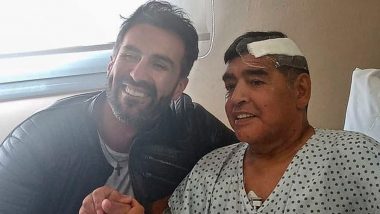 Diego Maradona’s doctor Leopoldo Luque is being investigated for medical negligence, which may have caused the death of the football great. Maradona, 60, died on November 25, 2020 (Wednesday) after a serious cardiac arrest in his home. His daughters have demanded to know the medication the late footballer was on. Maradona had earlier this month undergone successful brain surgery to remove a blood clot and was reportedly on rehab for alcohol addiction. Reports said, police raided the home and clinic of the doctor and is also investigating him for any medical negligence. Lionel Messi Tribute to Diego Maradona! Barcelona Star Celebrates in Iconic Newell’s Old Boys Shirt, Dedicates Goal to Argentina Legend (Watch Video).

The investigation was ordered after questioned the treatment Maradona was receiving in rehab and demanded to know the medication their late father was on. Reports in the Argentina media also stated his daughters had questioned if their late father was receiving appropriate medication. Maradona's lawyer Matias Morla has also demanded a probe into the emergency response to the footballer’s death. All Blacks Pay Tribute To Diego Maradona Ahead Of The Rugby Championship Clash With Argentina (Watch Video).

Morla had claimed the first ambulance had taken more than half an hour to reach the house where Maradona was staying. He had also claimed Maradona did not receive any medical checks in his final 12 hours before his shock death. Reports have also suggested Maradona told one of his relatives, who was staying with him, about his illness before going to bed and dying in his sleep.

Maradona enjoyed a successful career at both club and international level. He captained Argentina to the 1986 FIFA World Cup and led Napoli to their first-ever Serie A title in 1987. Maradona also guided Napoli to a second Serie A in 1990 among other trophies. He is regarded as one of the greatest footballers of all-time and was joint-winner, along with Pele, in FIFA’s player of the century. Maradona also played for Barcelona and Sevilla in Europa before moving back to Argentina with Newell’s Old Boys and also a second spell at Boca Juniors.

(The above story first appeared on LatestLY on Nov 29, 2020 10:37 PM IST. For more news and updates on politics, world, sports, entertainment and lifestyle, log on to our website latestly.com).