England vs Scotland, UEFA Euro 2020 Live Streaming Online & Match Time in IST: How to Get Live Telecast of ENG vs SCO on TV & Free Football Score Updates in India

England vs Scotland Euro 2020 match will be played on June 19, 2021 (Friday mid-night) at the Wembley Stadium in London, England. The match is scheduled to start at 00:30 am IST (Indian Standard Time). 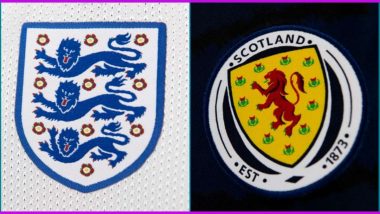 England will be aiming to qualify for the round of 16 of the European championships when they take on Scotland at the Wembley Stadium. The Three Lions dominated Croatia in their opener but had just a solitary goal to show for their efforts. But points are crucial in tournaments such as these and manager Gareth Southgate will take it as long as they come. There is a talk about England being one of the favourites to lift the cup but its still early days in the competition and the camp will like to take it one game at a time. Opponents Scotland lost to Czech Republic in their last match which makes tonight’s game a virtual knock-out clash.  Euro 2020 Day 8 Schedule: Today's Match With Kick-Off Time in IST, Upcoming Fixtures and Updated Points Table.

Dean Henderson has withdrawn from the England squad owing to a hip injury, paving the way for Aaron Ramsdale to join the team. There is so much attacking talent at the England disposal at the moment that Jadon Sancho failed to make the matchday squad against Croatia while Marcus Rashford could only start on the bench. Mason Mount as the playmaker is doing wonders for the Three Lions and his link up play with Harry Kane has been very impressive.

Kieran Tierney could miss the game for Scotland as he battles a calf problem. The world class full back would have been vital in stopping England’s forward players and his absence is a big miss. Scott McTominay and John McGinn in midfield can be effective in both the boxes. Che Adams and Kevin Nisbet need crosses into the box as they cut a frustrated figure in the last match. Euro 2020 Schedule in IST, Free PDF Download: Get Fixtures, Time Table With Match Timings and Venue Details of Football Tournament.

When is England vs Scotland, UEFA EURO 2020 Match? Date, Time and Venue Details

England vs Scotland Euro 2020 match will be played on June 19, 2021 (Friday mid-night) at the Wembley Stadium in London, England. The match is scheduled to start at 00:30 am IST (Indian Standard Time).

Sony Pictures Networks India is the official broadcaster of UEFA EURO 2020 in India. It will broadcast England vs Scotland, live match on Sony Ten 2 in English, Sony Ten 3 in Hindi, Sony Ten 4 in Tamil and Telugu, Sony Six in Bengali and Malayalam.

The live online streaming of England vs Scotland, UEFA EURO 2020 football match will be available on the SONY LIV app and website. JIO will also provide the online streaming of the game for its users on the JIO TV app. England could make light work of Scotland tonight given the wide gulf in class between the two nations.

(The above story first appeared on LatestLY on Jun 18, 2021 07:16 PM IST. For more news and updates on politics, world, sports, entertainment and lifestyle, log on to our website latestly.com).