Erling Haaland is such a big star by now that even the referees cannot stop themselves from actually getting an autograph from him. After Manchester City beat Borussia Dortmund, the assistant referee walked up to the youngster and asked for his autograph. 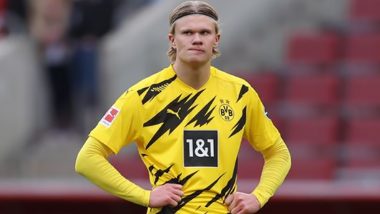 While speaking about the assistant referee seeking an autograph from Haaland, Pep explained that may be the referee was a fan of Haaland. "Maybe he’s a fan of Haaland so why not? Maybe it was for his son and daughter. I’ve never seen it before but they did a good job," he said in the post-match presser. Manchester City won the game 2-1 with Kevin de Bryune scoring an early goal for the team and then Phil Foden slammed the second one.

Kevin De Bruyne with an outrageous defence splitting pass ....Sterling gets the Assist while Gabriel Jesus gets the Goal#LEIMCI#PL pic.twitter.com/EmwYSLZdcM

The match was also under the scanner because Ederson's goal was ruled out harshly ruled out as the youngster in the bid of pushing the ball beyond the goal post kicked the goalkeeper. The referee blew the whistle before the ball reached the goal post which meant even the VAR could not come to their assistance. Marco Rues scored a goal for Dortmund at the 84th minute.

(The above story first appeared on LatestLY on Apr 07, 2021 10:03 AM IST. For more news and updates on politics, world, sports, entertainment and lifestyle, log on to our website latestly.com).