Ronaldo grabs the spotlight everywhere he goes with his record-breaking performances and this time, he has his sights set on Euro 2020, which is perhaps one of the biggest tournaments in football this year. Here is a list of Let the number of records the Portugal ace can break in this year's competition. 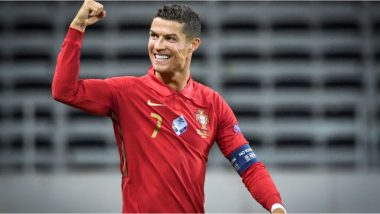 Cristiano Ronaldo is a player one would easily associate with records. Everywhere he has played so far, starting with the Premier League, to La Liga, the Serie A and the Portuguese national side, the star forward has never failed to impress and make his impact felt on the record books. He grabs the spotlight everywhere he goes with his record-breaking performances and this time, he has his sights set on Euro 2020, which is perhaps one of the biggest tournaments in football this year. Let us take a look at the number of records the Portugal ace can break in this year's competition: Cristiano Ronaldo & Georgina Rodriguez Celebrate Birthdays of Their Children Eva & Mateo, Post Super Cute Family Photo on Social Media

1) Most Euro tournament appearances: A record that can be mostly owed to Ronaldo's astonishing fitness, the Portugal and Juventus star man would become the footballer with most appearances in the Euro tournaments. With four appearances so far. he would outshine the likes of Lothar Matthäus and Peter Schmeichel along with 11 other names when he takes the field for Portugal against Hungary on June 15.

2) Most goals: Ronaldo is currently sitting at level with French legend Michel Platini for the most number of goals in Euros. They both are tied at nine. Come Euro 2020, Ronaldo would have a golden opportunity to go past that mark and become the highest scorer in the history of the tournament. He had scored his first goal in the Euros back in 2004 against Greece. And in all likelihood with the kind of threat he poses upfront, one wouldn't deny the fact that he can surely break this record!

3) Most Euro wins as captain: This one might be just slightly difficult but definitely not unachievable! If Ronaldo can guide to a successful defense of their Euro title that they won back in 2016, he would join Spanish great Iker Casillas (2008 and 2012) as the only captains to have led their sides to Euro title triumphs.

4) Oldest scorer in Euro final: Another record, which is hard to predict that it would be broken by Ronaldo but something that definitely is not impossible. Should Portugal reach the final on July 11 and Ronaldo finds himself on the scoresheet, he would become the oldest at 36 years and 156 days, to do so. The current oldest player to have scored in a Euro final is West Germany's Bernd Hölzenbein, who scored against Czechoslovakia in the 1976 final.

5) Hattrick in a Euro match: This one is a bit surprising but Ronaldo doesn't have a hattrick to his name in the Euros. Yes, you read that right. Pretty unbelievable? Well yes, Ronaldo has scored a total of nine career hattricks for his country but none of them have come at the Euros. However, the star man is highly talented enough to break this record this time around.

(The above story first appeared on LatestLY on Jun 07, 2021 09:52 PM IST. For more news and updates on politics, world, sports, entertainment and lifestyle, log on to our website latestly.com).