FIFA U17 Women’s World Cup 2022: India Placed With USA, Brazil and Morocco in Group A

Hosts India were placed in a tough group with 2008 runners-up the United States, Brazil and Morocco to contend with in Group A in the FIFA U-17 Women's World Cup which will be held from October 11-30 this year. 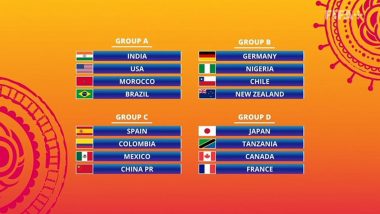 Mumbai, June 24: Hosts India were placed in a tough group with 2008 runners-up the United States, Brazil and Morocco to contend with in Group A in the FIFA U-17 Women's World Cup which will be held from October 11-30 this year. The draw for the 16-team event was conducted at the FIFA headquarters in Zurich on Friday. The teams have been divided into four groups of four each, ensuring that two teams from the same FIFA confederation are not in the same group.

India will open their campaign in Group A against the United States on October 11. India, who qualified for the event as hosts and will be making their maiden appearance in the top event for under-17 girls that started in 2008, avoided meeting any of the other previous medallists. They will now be hoping to finish among the top two in their group and qualify for the quarterfinals. No host nation has ever reached the semifinals in the six editions of the event held so far, all losing in the group stage itself. FIFA U-17 Women’s World Cup 2022: Tanzania, Morocco and Nigeria Claim Final Three Spots.

Thus, European powerhouse Germany the only European team to play in all six editions of the event, head Group B with Nigeria, Chile and New Zealand, bronze medallists in the previous edition in 2018 in Uruguay, as other contenders. Group C comprises Spain, the 2018 champions, Colombia, Mexico, who lost to Spain 1-2 in the 2018 final, and China while Group C has Japan, the 2014 winner, facing Tanzania, the first-timers from Africa, and Canada, another team that has participated in all six previous editions of the event, and France, who won the title in 2012 when the event was held in Azerbaijan.

North Korea, the most successful nation in this event with two titles -- in 2008 and 2016, are not there while their neighbours from South Korea, who won the title in 2010 too are missing from the biennial event. The 2022 event was earlier scheduled to be held in India in 2020 but was cancelled because of the Covid-19 pandemic. The 2022 FIFA U-17 Women's World Cup will be held from October 11-30 at three venues -- the Kalinga Stadium in Bhubaneswar, the Pandit Jawaharlal Nehru Stadium, Margao, Goa and the Dr. D.Y Patil Stadium, Navi Mumbai.

(The above story first appeared on LatestLY on Jun 24, 2022 05:53 PM IST. For more news and updates on politics, world, sports, entertainment and lifestyle, log on to our website latestly.com).