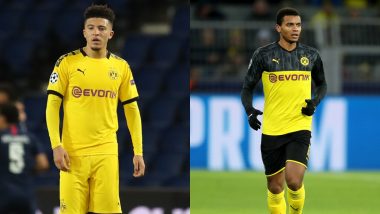 Jandon Sancho and Manuel Akanji of Borussia Dortmund have been fined by the German Football League (DFL) for breaking the coronavirus social distancing rules to get haircuts. Pictures of Sancho and Dortmund centre-back Akanji flouting the rules to get haircuts merged online last week. The pictures, which also showed Dan-Axel Zagadou and Raphael Guerreiro, drew a lot of flak online with Dortmund needing to step in to defend their players. The club had observed that the players and the stylist involved had maintained hygiene and followed the precautions during the haircut. Jadon Sancho of Borussia Dortmund Pays Tribute to George Floyd, Says ‘We Are Stronger Together’.

The DFL confirmed in a statement that Sancho and Akanji will be fined but did not mention the value nor it did name the other four players, who were allegedly involved and had also broken the rules for a haircut with celebrity stylist Winnie Nana Karkari. The statement informed that the club will not be fined and that the players involved, Sancho and Akanji in this case, had five to appeal. Kai Havertz Transfer News Update: Bayer Leverkusen Reject Real Madrid’s Bid for Star Forward.

"The DFL fines Manuel Akanji and Jadon Sancho. The Borussia Dortmund players had apparently violated general hygiene and infection protection standards at home hairdressing appointments,” the statement read. "There is no question that professional footballers have to have their hair cut. However, this currently has to be done in accordance with the medical-organisational concept. The DFL does not provide any information about the amount of a penalty in contractual penalty proceedings. Players have the right to lodge a complaint within five days.”

Sancho and Akanji were among six Dortmund players accused of allegedly breaking the coronavirus lockdown rules. Both the players, along with Raphael Guerreiro, Thorgan Hazard, Axel Witsel and Dan-Axel Zagadou, had been visited by Nana Karkari for haircuts, German newspaper Bild had reported. The tabloid had also released some pictures of Sancho and Akanji which showed that neither the players nor the hair-dresser were wearing a mask as is the protocol.

(The above story first appeared on LatestLY on Jun 05, 2020 09:30 PM IST. For more news and updates on politics, world, sports, entertainment and lifestyle, log on to our website latestly.com).