The 27-year old plays for National Women's Soccer League (NWSL) side Washington Spirit and has also represented Japan at the 2019 Women's World Cup in France. 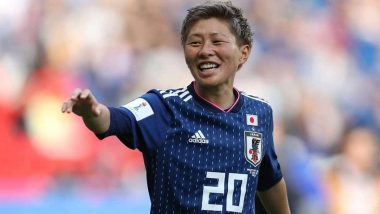 Japan women's team footballer Kumi Yokoyama has revealed their identity to be that of a transgender man. Yokoyama wanted to raise more awareness about the LGBTQ community back in Japan. The 27-year forward plays for Washington Spirit in the National Women's Soccer League (NWSL) and felt that it was easier to be living with the identity of a transgender in Germany and the United States of America. This was revealed during a video interview on YouTube. "I’ve dated several women over the years but I had to stay closeted in Japan,” Yokoyama said, as translated by the Japan Times. “In Japan, I’d always be asked if I had a boyfriend, but here (in the U.S.) I’m asked if I have a boyfriend or girlfriend. When my girlfriend said there was no reason for me to stay closeted, it really hit me." Laurel Hubbard, New Zealand Weightlifter, Will Become the First Transgender Athlete to Compete at the Olympics During Tokyo 2020

Yokoyama had undergone a breast tissue removal surgery seven years ago without any kind of hormonal treatment, which would involve the risk of failing dope tests. “Coming out wasn’t something I was enthusiastic about, but if I think about my life going forward, it would be harder to live closeted so I found the courage to come out," Yokoyama added. It was also reported that the striker would use  gender-neutral pronouns like 'they' and 'them'.

Yokoyama, who had represented Japan at the 2019 Women's World Cup played in France, stated that their inspiration was Canada footballer Quinn. “(Quinn) wore a (sweatshirt) that said ‘Protect Trans Kids’ before a game, and I realized that’s what taking action looks like,” Yokoyama said, adding, "Lately the word ‘LGBTQ’ has become more commonly known in Japan and been covered by the media, but people in my position aren’t able to raise our voices and talk about it. If all of us speak up together then we can help raise awareness.”

(The above story first appeared on LatestLY on Jun 22, 2021 11:58 PM IST. For more news and updates on politics, world, sports, entertainment and lifestyle, log on to our website latestly.com).