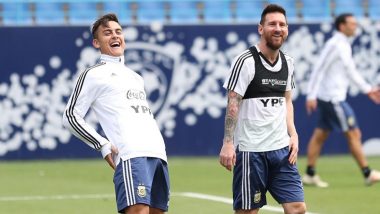 Lionel Messi, Paul Pogba, Paulo Dybala, Marcus Rashford and others have supported #BlackOutTuesday movement which is catching up on social media. The death of George Floyd has led to massive outrage of the netizens and this once again has sparked the debate of racism. Many sporting personalities across the world have come out in support of George Floyd who was handcuffed and the police kept on pressing his knee against his throat despite the fact he kept complaining that he couldn’t breathe. To condemn the act several hashtags have been going viral on social media. This includes #BlacklivesMatter and #BlackOutTuesday. Marcus Rashford, Kylian Mbappe, Virgil van Dijk, David Beckham & Others Mourn Death of George Floyd, Liverpool; Barcelona, Man United Post Tweets With Hashtag Black Lives Matter.

Several footballers like Marcus Rashford, Paulo Dybala, Lionel Messi have supported the #BlackOutTuesday on social media and have uploaded a snap with a complete blackout. No text was written on the snap and many other clubs including Arsenal, Burnley, Tottenham Hotspur and others have joined the movement. Check out a few tweets below:

We stand against racism.

We stand side by side with our black community.

We stand with our black players of the past, present and future.

A while ago we told you that Lewis Hamilton had slammed his fraternity for staying mum on the killing of Geroge Floyd. Not only football but also cricketing fraternity had spoken up elaborately about racism. Chris Gayle was the first one who spoke about racism in the sport and then KL Rahul was the one who also put out long posts stating that the sporting fraternity was ruled by skills and not colour.

(The above story first appeared on LatestLY on Jun 02, 2020 11:21 PM IST. For more news and updates on politics, world, sports, entertainment and lifestyle, log on to our website latestly.com).