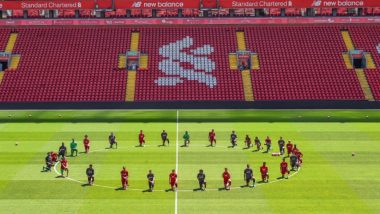 For a couple of days now, massive protests have broken out in the US due to the death of George Floyd, an American African man who died in Powderhorn, a neighbourhood south of downtown Minneapolis, Minnesota. Floyd died last Monday after a white police officer held his knee on the handcuffed black man's neck for a few minutes and the shocking incident sparked protests all around the USA and now even footballers expressed their solidarity towards the incident. Now Marcus Rashford, Kylian Mbappe, Virgil van Dijk, David Beckham have expressed their solidarity via social media. Jadon Sancho of Borussia Dortmund Pays Tribute to George Floyd, Says ‘We Are Stronger Together’.

Liverpool, Barcelona, Manchester United have also joined the bandwagon and have posted tweets against racism. While Marcus Rashford penned a small note, the players Liverpool stood in a circle to express their solidarity towards the death of George Floyd. Virgil van Dijk posted the same picture on social media. Whereas Romelu Lukaku liked the video which had protests with slogans Black Lives Matter. Now let’s have a look at the tweets below:

what I can say about the death of George Floyd. No-one could watch a man plead for his life at the hands of police officers and not be truly disgusted and angry. My heart goes out to George’s family and I stand in solidarity with the black community and millions of others across the world who are outraged by these events. Its heartbreaking to see that in 2020 this is still happening.. I came across this video that I think sums up some powerful truths really well. We have to educate ourselves and our children to really understand racism and how to fight it. Its up to all of us to step up and move the conversation on, not just in the US but across the world. On the eve of Global Parents Day I wanted to send this message of support and my family and I will continue to use our platforms to raise awareness in the fight against racism. Check out my story for more information and how you can help find justice for #GeorgeFloyd.

Even Micheal Jordan expressed his grief due to the death of George Floyd. Talking about the incident, despite repeated requests to the police by George Floyd, the cops did not leave him. He was constantly heard saying, "Please leave me, I can't breathe."

(The above story first appeared on LatestLY on Jun 01, 2020 11:20 PM IST. For more news and updates on politics, world, sports, entertainment and lifestyle, log on to our website latestly.com).