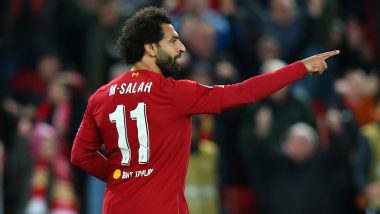 Mohamed Salah became a trending name just after he scored a goal at the 44th minute of the game against Crystal Palace and thereby emulated Cristiano Ronaldo’s record. With this, the Egyptian striker has scored 47home goals in the Premier League. He equalled the former Manchester United striker's record as he also had scored 47 home goals in the Premier League. He also broke scored the 100th goal of the season for Liverpool. Mohamed Salah Says ‘It's Our Time’ As Liverpool Trashes Crystal Place 4-0 in EPL 2019-20.

The Egyptian King also has scored 15 Premier League goals at home this season; no other player has scored more than 10. Also their goalkeeper Alisson Becker has more clean sheets than any other player in this season. The Brazilian has 12 sheets in the season so far. Liverpool as a team also broke yet another record of winning 23 games at home which is the best-ever winning run at home in English top-flight history. Even Liverpool shared the records on social media. Check it out below:

Mo nets our 💯th goal of the season 🤩

Another record by Mo Salah

⚽️@MoSalah has netted 15 @premierleague goals for us at Anfield this season, including seven in his last six games 🔥 pic.twitter.com/PDcwL3dry9

Now, check out the video of Salah's video

@MoSalah has now scored 15 #EPL goals at Anfield this season. A New Record for the Egyptian as no other player has scored more than 10 home goals in 19/20 season.

After the match, Mohamed Salah was extremely elated with the win and also praised the team for the performance they put up and said,  "It is our time." They just need a couple of points to walk away with the title. The Reds will next play against Manchester City in July 3, 2020.

(The above story first appeared on LatestLY on Jun 25, 2020 01:47 PM IST. For more news and updates on politics, world, sports, entertainment and lifestyle, log on to our website latestly.com).