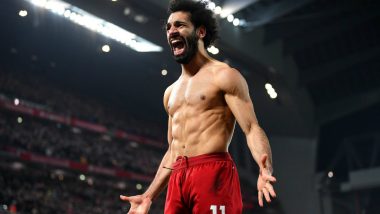 Liverpool striker Mohamed Salah is on cloud nine after the Reds went on to thrash Crystal Palace 4-0 at the Anfield. After the match, the Egyptian King looked all set to celebrate the title win for the team. Just after the comeback of EPL 2019-20, Liverpool has looked in sublime touch and needed only a couple of wins to walk away with the title. Their match against Everton ended with a goalless draw, but the game against Crystal Palace ended with the hosts winning the match comprehensively. Mohamed Salah, Sadio Mane, Trent Alexander Arnold and Fabinho were the ones who scored a goal for the team. Virgil van Dijk Warns Liverpool Opponents Ahead of Their EPL 2019-20 Restart, Says ‘With Two Wins, We Will Be Champions; but It Doesn’t Stop There’.

With this, Liverpool now has 86 points in their kitty and are 23 points ahead of Manchester City who is placed on the second spot of the EPL 2019-20 points table. Now, the team just needs a couple of points to win the league. Mohamed Salah spoke to the official website of the Reds and obviously sounded elated.  Like everyone else he also wanted to win the Premier League title and said that the team does not have to wait longer. "Maybe last year we had a chance to win it but Man City also performed really good and they won it. It's our time to win it and it's great," he said.

During the conversation, he also praised the team for the kind of performance they put up. The team will play against Manchester City on July 3, 2020. Prior to this, Virgil van Dijk also said that they would want to keep their winning streak on not only for this season but also the upcoming season.

(The above story first appeared on LatestLY on Jun 25, 2020 12:53 PM IST. For more news and updates on politics, world, sports, entertainment and lifestyle, log on to our website latestly.com).