Real Madrid vs Liverpool: Ahead of UCL 2021-22 Final, Take a Look at Head-to-Head Record Between the Two Giants

The top two European giants are set to battle it out for continental supremacy in the final of the UEFA Champions League, which would be played on May 29. Ahead of this blockbuster game, let's see who has an upper hand when it comes to head-to-head records. 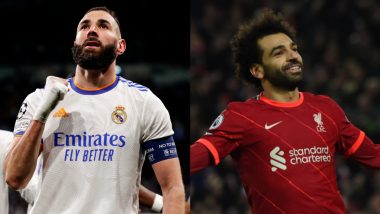 Two of Europe's best clubs this season--Real Madrid and Liverpool are set to battle it out in the final of the Champions League. It truly could not get bigger and better than this. Both these clubs have had consistent performances in their domestic leagues as well as in Europe and it is time that one of them comes out on top and takes center stage as the champions of the continent. It turned out to be an intense clash laced with emotions and action the last time these two teams squared off against each other in the final of the UEFA Champions League. The same can be expected this time as well, with both of them in great form. UCL 2022 Final: A Look At Liverpool and Real Madrid's Record in Champions League Finals Ahead Of Summit Clash

While Real Madrid have already claimed the La Liga crown with quite a few games under their belt, Liverpool are mounting a strong challenge for the Premier League title with Manchester City. With them set to take on each other in the UCL final on May 29, let us take a look at who has the advantage when it comes to head-to-head records.

As you can see, things are pretty evenly-matched between both these top clubs when it comes to head-to-head meetings in the Champions League. Real Madrid enjoy a slim lead but Liverpool would not be too bothered about that, considering the fact that they have been a formidable outfit in Europe and England for the past few years. The Los Blancos have had a superb season with their frontman Karim Benzema firing all guns and it looks as if he can't do anything wrong at the moment.

Real Madrid had come out victorious the last time they battled Liverpool in the UEFA Champions League, back in the 2020-21 season. They had won 3-1 on aggregate in the quarterfinals. Can they make it three in a row against Jurgen Klopp's men? Or would Liverpool have their revenge for the defeat in the 2018 UCL final?

(The above story first appeared on LatestLY on May 20, 2022 05:31 PM IST. For more news and updates on politics, world, sports, entertainment and lifestyle, log on to our website latestly.com).