Sergio Ramos and Karim Benzema are currently recovering from respective injuries and have been left out of the squad to face Inter Milan in the Champions League but Los Blancos are boosted with the return of Brazilian midfielder Casemiro. Hugo Doro, who is on loan from Getafe, will be traveling to Italy with the team. 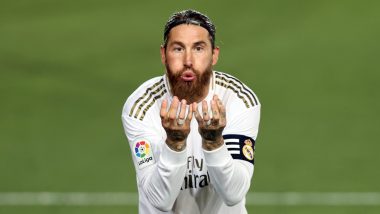 Sergio Ramos and Karim Benzema are set to miss the clash against Inter Milan in the Champions League as the duo haven’t been included in the matchday squad by manager Zinedine Zidane. Both players are currently recovering from respective injuries and have been left out but Los Blancos are boosted with the return of Brazilian midfielder Casemiro. Hugo Doro, who is on loan from Getafe, will be traveling to Italy with the team. Juventus Director Fabio Paratici Squashes CR7’s Transfer To Real Madrid & Manchester United.

Karim Benzema hasn’t featured for Real Madrid since picking up a knock in the 4-1 loss to Valencia at the Mastella Stadium earlier this month. The Frenchman also wasn’t involved in the weekend actions against Villarreal as the record Spanish champions dropped points for the second successive league game.

Meanwhile, Sergio Ramos was injured while on national duty with Spain as the star defender picked up a hamstring injury during the record-breaking 6-0 win against Germany. The Spaniard was substituted just before the end of the first half. The 33-year-old’s injury is not expected to be much serious, however, Zidane has decided to not include him as a precaution.

Meanwhile, Casemiro’s return will be a huge boost for Zinedine Zidane as the Brazilian has now recovered from COVID-19. The 28-year-old joined the Madrid squad for the weekend clash against Villarreal but was deemed not fit enough to take part in the game but is expected to play a huge role against Inter Milan.

Surprisingly, Real Madrid and Inter Milan, both find themselves as the bottom two teams in their Champions League group. The Spanish giants are currently third with three points while the Italian side are fourth with two points. Both need a win in this clash in order to boost their chances of advancing in the competition.

(The above story first appeared on LatestLY on Nov 24, 2020 08:55 AM IST. For more news and updates on politics, world, sports, entertainment and lifestyle, log on to our website latestly.com).