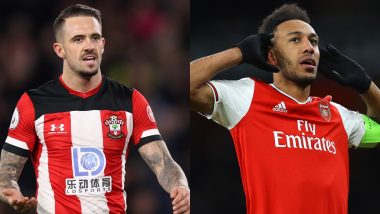 Danny Ings and Aubameyang Will the Player to Watch Out (Photo Credits: Getty Images)

Arsenal will be desperately hoping to end their disastrous run and pick up first points of project restart when they face Southampton in their next Premier League 2019-20 fixture on Thursday. Mikel Arteta’s side have lost both of their league matches since returning to action last week and need wins to keep up hopes of a Europa League berth alive. Southampton, on the other, trashed Norwich City 3-0 in their only game after a three-month halt. Meanwhile, fans searching for all the tips and team suggestions to pick the best team for Southampton vs Arsenal match should scroll down. David Luiz Signs One-Year Contract Extension With Arsenal, Pablo Mari and Cedric Soares Make Loan Move Permanent.

A win for Southampton will take them level on points with Arsenal, who have 40 points from 30 matches and are 11th in the league table. Ralph Hasenhuttl’s side are three points and as many spots behind in the standings. Southampton will have striker Shane Long back after he missed the Norwich clash due to a muscle complaint.

Arsenal though are depleted with injuries. Goalkeeper Bernd Leno joined Callum Chambers, Pablo Mari, Gabriel Martinelli, Cedric Soares and Lucas Torreira on the treatment table. Centre-back David Luiz will be serving the final match of his two-game suspension. But Granit Xhaka and centre-back Sokratis Papastathopoulos are back in training and could play a part.

Southampton vs Arsenal, EPL 2019-20, Dream11 Team Prediction: Midfielders – Nicolas Pepe (ARS) has the best player for Arsenal and is a must pick for midfielders. Southampton’s James Ward-Prowse (SOU), Nathan Redmond (SOU) and Pierre-Emile Hojbjerg (SOU) will be the other midfielders in the side. Reiss Nelson (ARS) will be the fifth midfielder in this fantasy team.

Southampton striker Danny Ings (SOU) should be made the captain for this fantasy team. He has been in fine scoring form and has already scored thrice in the last two games and is fourth in Premier League golden boot race with 16 strikes. Arsenal’s Nicolas Pepe (ARS) or Aubameynag (ARS) can be made the vice-captain.

(The above story first appeared on LatestLY on Jun 25, 2020 04:17 PM IST. For more news and updates on politics, world, sports, entertainment and lifestyle, log on to our website latestly.com).