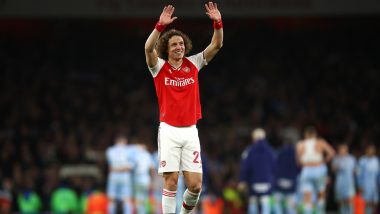 David Luiz has signed a new one-year contract extension with Arsenal which will see him stay at the club until the end of 2020-21 season. The Brazilian joined the Gunners at the start of this season from Chelsea and has been one of the mainstays in the team during the current campaign. Along with the Brazilian new deals have been offered to Cedric Soares, Pablo Mari and Dani Ceballos. Arsenal Player Tested Positive for COVID-19 Before Manchester City Clash, Now Fine.

David Luiz has come under immense criticism since Premier League’s restart following the coronavirus enforced suspension. The 33-year-old was heavily criticized for his performance against Manchester City where his mistake cost the team a goal and then later got sent-off while conceding a penalty. Arsenal Lost to Manchester City Because of My Mistakes, Admits David Luiz.

This led many fans to believe that the defender, whose contract with the Gunners was set to expire at the end of the month, will not be offered a new deal. But Mikel Arteta seems keen on having the defender in his set up for next season and as a result, has been offered a one-year extension.

‘David is a really important player for us. He has played most of our matches this season and has been important for the team. His passing, his communication with the team on and off the pitch. He helps everyone.’ Said Arsenal’s technical director Edu.

Pablo Mari and Cedric Soares, who arrived in January from Flamengo and Southampton respectively, have made their loan moves permanent while Dani Ceballos, has extended his temporary stay at the club until the end of the current season.

‘We were really pleased with Pablo - his behaviour, the way he is training, his mentality and his quality. Cedric is also going to be an important player. He has been unlucky with the injuries but he is close to being ready and gives us more strength,’ Edu added.

(The above story first appeared on LatestLY on Jun 24, 2020 03:14 PM IST. For more news and updates on politics, world, sports, entertainment and lifestyle, log on to our website latestly.com).