UEFA Men's Player of the Year 2019-20: No Cristiano Ronaldo, Lionel Messi in Final Shortlist For First Time in 10 Years 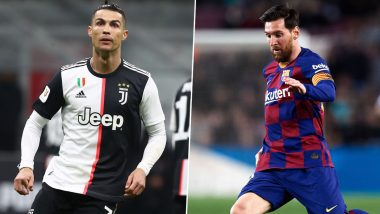 Lionel Messi and Cristiano Ronaldo have dominated the footballing world for more than a decade but the two superstars are now entering the twilight years of their career and new stars are starting to take over the mantle. In recently announced nominees for UEFA’s Men’s Player of the Year award, for the first time in ten years, neither Ronaldo nor Messi were present in the final shortlist as both the players fell short in the Champions League. No Cristiano Ronaldo and Lionel Messi for UEFA Champions League 2019-20 Awards, Seven Bundesliga Players Make it to the List.

Lionel Messi has won the award twice in 2011 and 2015 having been nominated six times in last 10 seasons while Cristiano Ronaldo has collected the accolade thrice in 2014, 2016 and 2017, all while playing for Real Madrid. However, neither of them made it to the final shortlist this time around after poor Champions League campaigns with the Barcelona skipper finishing in fourth while the Juventus star was placed tenth. Cristiano Ronaldo Receives IFFHS World's Best International Top Goal Scorer 2019 Trophy, CR7 Posts Picture on Social Media.

Barcelona were defeated in the quarter-finals of the Champions League as eventual winner Bayern Munich thrashed them 8-2 in Lisbon. While Juventus went out at the round of 16 after suffering a shock two-legged defeat to French side Lyon. Both players had dismal individual campaign as well, scoring just three goals in the entire competition.

In the absence of both Lionel Messi and Cristiano Ronaldo, Robert Lewandowski, Kevin De Bruyne and Manuel Neuer have made the final shortlist for the award. Liverpool defender Virgil Van Dijk, won the honour last time around and the Polish striker is expected to win it this fear, after a stellar campaign, scoring 15 goals and winning the Champions League trophy as well.

(The above story first appeared on LatestLY on Sep 23, 2020 09:21 PM IST. For more news and updates on politics, world, sports, entertainment and lifestyle, log on to our website latestly.com).