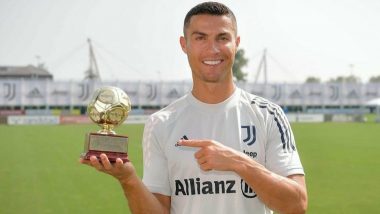 Cristiano Ronaldo has won the IFFHS World’s Best International Top Goal Scorer 2019. Ronaldo who recently completed 102 goals in the international matches, has been in top form and has been on a scoring spree. This is the fourth time he won the IFFHS World’s Best International Top Goal-Scorer award. Ronaldo won the award in 2016 when he was still playing for Real Madrid and then in the following year in 2017. Baghdad Bounedjah from Al Sadd won the award in 2018 and now, in 2019, Ronaldo walked away with the gong. The five-time Ballon d'Or winner in November 2019, scored his ninth international hat-trick against Luxembourg. No Cristiano Ronaldo and Lionel Messi for UEFA Champions League 2019-20 Awards, Seven Bundesliga Players Make it to the List.

In 2019, Ronaldo netted 14 international goals from 10 appearances. The hat-trick put him on goal number 99. It took him around six months for him to reach the mark of 100 goals. Recently during the match against Sweden during the UEFA Nations League 2020. Now, let's have a look at the post by Ronaldo on social media.

Juventus star has missed out on the UEFA Champions League 2019-20 Award this year. Even Lionel Messi and Liverpool's Virgil van Dijk, Alisson Becker were also the ones who missed out on the awards. Instead, seven Bundesliga players including Robert Lewandowski, Thomas Muller and others have been nominated for the award this year. All thanks to Bayern Munich's performance in the Champions League 2019-20 as they walked away with the coveted trophy.

(The above story first appeared on LatestLY on Sep 18, 2020 11:30 PM IST. For more news and updates on politics, world, sports, entertainment and lifestyle, log on to our website latestly.com).