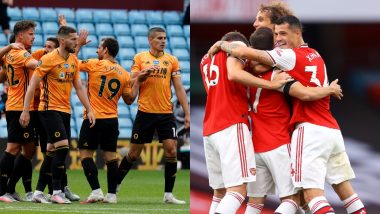 Wolves vs Arsenal, Premier League 2019-20, Online Live Streaming and Live Telecast: Arsenal will hope to extend their three-match winning run across all competitions when they host Wolverhampton Wanderers in Premier League 2019-20 on Saturday. The league match against Wolves will also start a run of five challenging fixtures for the Gunners, which will see them play Leicester City, Tottenham, Liverpool and Manchester City. Wolves too are on a winning streak of three matches but unlike Arsenal, all of their wins have come in the Premier League. Forward Gabriel Martinelli Signs New Long-Term Deal With Arsenal.

Mikel Arteta’s side are virtually out of the contention for a Champions League place with only 46 points from 32 games. Wolves from the same number of matches have 52 points and can temporarily move into the top four if Manchester United fail to beat Bournemouth in an earlier start. Nuno Espírito Santo’s will be aware that a top-five finish could be enough to hand them Champions League football next season if Manchester City’s European ban is upheld.

Wolves vs Arsenal match in Premier League 2019-20 will be played at the Molineux Stadium. The match will take place on July 04, 2020 (Saturday) and is scheduled to start at 10:00 pm IST (Indian Standard Time).

Where to Watch the Live Telecast of Wolves vs Arsenal, Premier League 2019/20 Season Football Match? TV Channels in India

Disney+ Hotstar, the OTT of Star Network, will be live streaming the match online for its fans in India. Jio subscribers can also follow the game live on JIO TV.

(The above story first appeared on LatestLY on Jul 04, 2020 07:57 PM IST. For more news and updates on politics, world, sports, entertainment and lifestyle, log on to our website latestly.com).