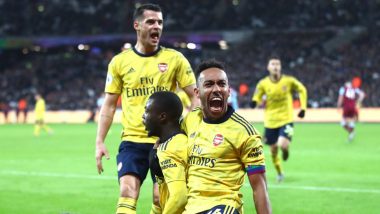 Norwich were thrashed 0-3 by Southampton in their first match back from a three-month halt. They lost 0-1 to Everton and also succumbed to a 1-2 defeat against Manchester United in the FA Cup quarter-finals. In the same period, Arsenal have played four and won and lost two each. David Luiz Signs One-Year Contract Extension With Arsenal, Pablo Mari and Cedric Soares Make Loan Move Permanent.

They too resumed the campaign with a 0-3 defeat to Manchester City before falling to a 1-2 loss at Brighton. But Arteta’s team have fought back with a 2-0 win over Southampton and also beat Sheffield United 2-1 to reach the FA Cup semis.

Arsenal vs Norwich City match in Premier League 2019-20 will be played at the Emirates Stadium on July 01, 2020 (Wednesday). The match is scheduled to start at 10:30 pm IST (Indian Standard Time).

Where to Watch the Live Telecast of Arsenal vs Norwich City, Premier League 2019/20 Season Football Match? TV Channels in India

Viewers can also catch the match on online platforms. Hotstar, the OTT of Star Network, will be live streaming the match online for its fans in India.

Arsenal are placed 10th in the Premier League points table with 43 points from 31 matches. They are virtually out of contention for the Champions League berths but can still progress to Europa League with a seventh-place finish. A win at home will take them as high as the seventh position. Norwich are placed at the bottom of the standings and have only 21 points. They look destined to return back to the Championships unless a drastic turn of results.

(The above story first appeared on LatestLY on Jul 01, 2020 03:04 PM IST. For more news and updates on politics, world, sports, entertainment and lifestyle, log on to our website latestly.com).