This is not the first time such a thing has happened. Earlier, the hockey ball and bat was restored to the statue after reports of it being stolen for the first time, emerged on social media a week ago. 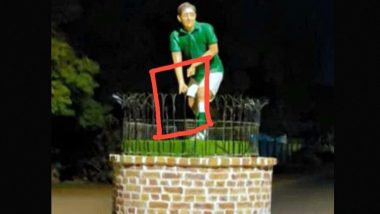 The hockey stick and ball from the statue of Pakistan great Samiullah Khan has once again been stolen, according to a social media post on Sunday. The stolen parts of the statue placed in Bahawalpur had earlier been restored and this development comes in less than a week's time. Khan had a statue installed in his name for being one of the legends in Pakistan hockey. Known as the 'Flying Horse' for his marauding runs in the left wing, Khan represented Pakistan from 1973 to 1982. Hockey Stick and Ball Reinstalled at Pakistan Olympian Samiullah Khan’s Statue After Being Stolen

Looks like 🏑 is in huge demand over there. Gone again. pic.twitter.com/9N4aVU2F3L

Hockey fans in Pakistan had earlier expressed disappointment after parts of the statue was stolen for the very first time. Khan has 55 goals to his name in international hockey, 12 of which he scored in World Cup competition. He also represented Pakistan in the 1976 Olympics where they ended up winning a bronze medal.

(The above story first appeared on LatestLY on Jul 25, 2021 12:13 PM IST. For more news and updates on politics, world, sports, entertainment and lifestyle, log on to our website latestly.com).