The Indians had quite a memorable day, as the country added to its medal tally at the Olympics with one silver and one bronze medal. Read below to see a recap of the country's performance on August 5. 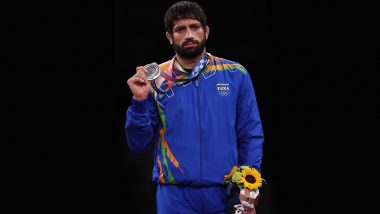 Team India had a very memorable day at the office in the Tokyo Olympics 2020 on August 5, Thursday. The day began with the Indian men's hockey team clinching the bronze medal and securing a podium finish at the Olympics after 41 long years. Ravi Kumar Dahiya, later in the day, also brought India glory by winning the silver medal in the Men's Freestyle 57kg final match.

The Indian women's team would be one of the areas of focus on August 6, as they take on Great Britain in the bronze medal match. They would be motivated by the success of the men's team and thus, would want to be at their absolute best. Besides, Bajrang Punia would be carrying India's medal hopes in the Men's Freestyle 65kg wrestling event.

(The above story first appeared on LatestLY on Aug 05, 2021 11:46 PM IST. For more news and updates on politics, world, sports, entertainment and lifestyle, log on to our website latestly.com).