Andy Murray Crashes Out in Second Round of Wimbledon 2022, Loses to USA’s John Isner in Four Sets 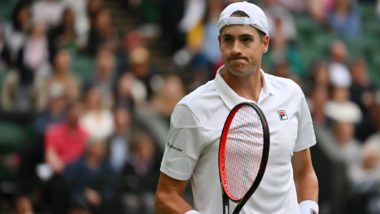 London, June 30 : Three-time Grand Slam winner Andy Murray crashed out of the Wimbledon 2022 after losing 4-6, 6-7 (4-7), 7-6 (7-3), 4-6 to USA's No.20 seed John Isner in the second-round here on Wednesday. In contrast to his third-round exit last year at his home Grand Slam, the Briton felt his game and his body were prepared for a second-week run this fortnight. "I could have had a good run here," the 35-year-old said in his post-match press conference. "It's one of those matches that, had I got through, who knows what would have happened." Wimbledon 2022: Ugo Humbert Upsets Third Seed Casper Ruud, Reaches Third Round.

Despite abdominal issues in the buildup to Wimbledon, Murray had no physical issues on the court and briefly flashed the sort of form that twice led him to titles on the London lawns. But Isner's booming serve kept Murray's brilliance at bay, keeping points short and not allowing the Briton to sink his teeth into the match. The defeat did little to dampen Murray's confidence; such was the 20th seed's serving dominance. He found fault with his own poor serving, particularly in the opening two sets when he made 44 and 55 per cent of his first serves, but said the result did not change his view that he could still progress to the late stages at majors.

"I think most of the players on the Tour would tell you that a match like that was won or lost based on a few points here and there," he reflected. "I didn't play well enough on those points tonight... Tonight's match, I don't see why it should change that view (that I can make deep major runs)." One key component to that sort of success at majors is being seeded. Murray entered Wimbledon at No. 52 in the ATP Rankings. He returned to the Top 50 two weeks ago - his highest position since 2018, but still short of earning one of the tournament's 32 seeds. "One of the reasons why improving your ranking and trying to get seeded is important (is to) avoid playing top players and dangerous guys like that early in tournaments," Murray said. Wimbledon 2022: Novak Djokovic Beats Thanasi Kokkinakis, Advances to Third Round.

He has been particularly focused on improving his ATP Ranking since he lost to World No. 1 Daniil Medvedev as an unseeded player at the Miami Open in March. Looking ahead, Murray fully intends to continue playing on the ATP Tour as long as he is "in a good place" with regard to his body. But he stopped short of guaranteeing a return to Wimbledon next year. "It depends on how I am physically. (If) physically I feel good, then we'll try to keep playing. But it's extremely difficult with the problems I've had with my body in the last few years to make long-term predictions about how I'm going to be even in a few weeks' time, never mind in a year's time," he said.

(The above story first appeared on LatestLY on Jun 30, 2022 11:12 AM IST. For more news and updates on politics, world, sports, entertainment and lifestyle, log on to our website latestly.com).