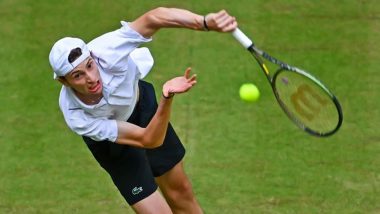 London, June 29 : France's Ugo Humbert upset third seed Casper Ruud 3-6, 6-2, 7-5, 6-4 to reach the third round at the Wimbledon 2022, here on Wednesday. Humbert needed three hours and 28 minutes across five sets in the first round against Argentine Tomas Martin Etcheverry. The lefty was rewarded for surviving that effort, as he broke Ruud's serve six times and hit 53 winners in his two-hour, 36-minute triumph. In the battle of Next Gen ATP Finals alumni, Humbert made a slow start, firing 15 unforced errors while his opponent remained solid. But once the Frenchman reined in his game, he was able to rely on his big serve and aggressive approach to power past Ruud. Wimbledon 2022: Unseeded Caroline Garcia Knocks Out Emma Raducanu in Second Round.

Humbert has played well on grass before, advancing to the fourth round at the All England Club in 2019 and lifting his first ATP 500 trophy last year in Halle. Ruud is now 3-5 on the surface. One year ago, Humbert was at a career-high World No. 25. The 24-year-old is currently No. 125 in the ATP Live Rankings. He will play Belgian David Goffin in the third round. The 2017 ATP Finals runner-up defeated 31st seed Sebastian Baez 6-1, 6-2, 6-4 earlier in the day and has not lost a set through two matches.

(The above story first appeared on LatestLY on Jun 30, 2022 10:56 AM IST. For more news and updates on politics, world, sports, entertainment and lifestyle, log on to our website latestly.com).