"Of course, for the confidence, when you beat everybody, it is just great, because I think people start to be a little bit scared about you," he said after beating Stefanos Tsitsipas in straight sets (6-4, 6-2, 7-5) in the Australian Open semi-final. 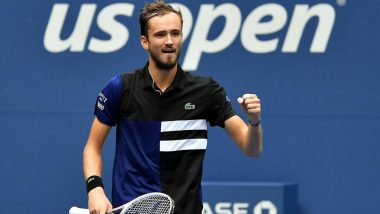 Melbourne, February 20: Daniil Medvedev, who is looking to become Russia's first Grand Slam champion since Marat Safin in 2005, said he is pleased to see himself playing with an amount confidence that can scare his opponents. The 25-year-old Medvedev faces Serbian top seed Novak Djokovic in the final of the Australian Open on Sunday. Djokovic has won the Australian Open title eight times and will be gunning for his ninth title here.

"Of course, for the confidence, when you beat everybody, it is just great, because I think people start to be a little bit scared about you," he said after beating Stefanos Tsitsipas in straight sets (6-4, 6-2, 7-5) in the Australian Open semi-final. Naomi Osaka Beats Jennifer Brady To Win Australian Open 2021 Women’s Singles Final, Twitterati Congratulates Japanese Star on 4th Grand Slam Title.

Medvedev will move to the world No. 2 spot if he wins the final. The 25-year-old is now unbeaten in 20 matches with 12 of these wins coming against top-10 opponents. "I remember one moment when I was already playing quite good, I actually was struggling with the top 10 guys when I was maybe around top 20 or top 30," added Medvedev. The world No. 4 called himself an underdog in the final against Djokovic.

"I'm the challenger, the guy that challenges the guy who was eight times in the final and won eight times. And I'm happy about it. I like to play against Novak. We have, since the first one when I was ranked 60, we had always tough matches physically, mentally. And he's one of the greatest tennis players in the history of tennis. So playing a final against him is superb. I'm really happy about it. Let's see what happens on Sunday."

Djokovic had said in a recent broadcast interview that the young challengers, who look to take over from him, Rafael Nadal and Roger Federer, including Medvedev have a "lot of work to do" to catch up with the big three of men's tennis. "They will be the leaders of the future, but I'm not going to hand it over to them," the world No.1 had said. "I'm going to make them work their ass off for it."

(The above story first appeared on LatestLY on Feb 20, 2021 04:45 PM IST. For more news and updates on politics, world, sports, entertainment and lifestyle, log on to our website latestly.com).